Why is it that every “W” word in my vocabulary today is one that is inherantely frustrating? Ok so the first 3 have positive uses but the last one… now don’t worry intrepid reader… this will not be a “woe is me” type entry in the blog that is Lisa’s life. Merely a momentary blip before I go over what ELSE has gone on in our rather cloudy and mildly rainy day.

So basically today was not exactly a day that “went as planned”… The weather did NOT co-operate for us to go to the homeschool park date which was quite the let down for all concerned. Even though there was not a TON of rain Trinity’s cough has me concerned enough that I don’t want to be trekking her out in unknown weather. After all this weekend is setting up to be BUSY! The boys were very upset about the cancellation and so were quite happy to act out… to the point where poor Emanuel came up with a smacked up face! I did figure out who the culprit was and had him appologize and give hugs. I am still at a bit of a loss as to how to stop the minor lying going on but I am working on it. All of this and Trinity not having a decent nap led to a cranky enough Lisa that Ken sent ME to nap! ACK! 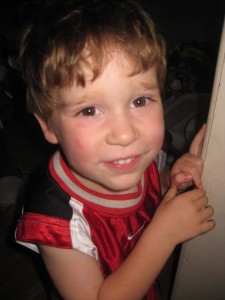 Ok so now onto much better things (see I told you it would be worth the wait!)… I got a TERRIFIC surprise today in the mail, a package! One of the ladies from my online sewing group Chatty Stitchers Exchangers (a yahoo group of ladies who cross stitch – talk about a TERRIFIC group) – Sherry – sent me some cardstock she had extra and then in the midst of a cleaning binge sent me CHRISTMAS CRAFT SUPPLIES! Talk about Christmas in July! The kids are ecstatic and I already have ideas brewing! Everything from pipe cleaners to pom poms to coloured googly eyes (the boys are REALLY excited about those!). So keep an eye peeled for Christmas crafts and be ready – Christmas this year in the Reinsch-Johnson home is going to be HOMEMADE! My favourite kind! 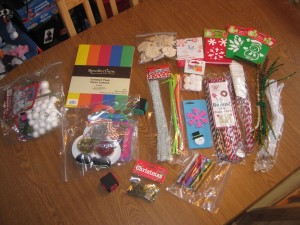 So since we couldn’t do the park thing I decided to have each boy sit down with a piece of paper and his box of crayons and make a picture for Grandma Anna, her birthday was the 26th and we will see her this Saturday. Since she and Mike are riding on the Harley to the gathering I figured the pictures would fit in their storage compartment. So each boy did his rendition of Harley the puppy. I was very strict with Emanuel and made him draw  HIS OWN picture without help and was quite pleased with the results. Now all I have to do is make a little coloured folder to keep them in. I also need to take some time tomorrow and get Trinity’s thumbprint on the card. I want to do up a few extra to keep for her baby book and maybe give to her god-mommies. (Another craft for a rainy day in this house has got to be thumbprint people…) 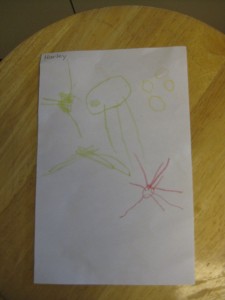 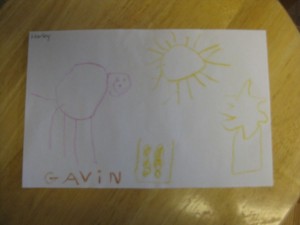 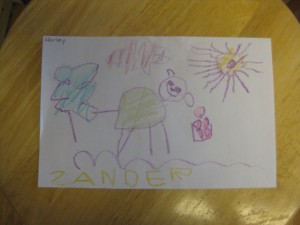 Ken spent some time taking Sean to get his vehicle and when he did finally get back came bearing the much needed diapers and milk (can’t go without either in this house!) AND my tickets for the Heritage Festival! EXCITING! AND on top of that Sean took him out for brunch and sent a meal for me. Steak and potatoes… I ate the steak and the boys ate the potatoes. Mmm. See how the day is picking up?

Add to that my raspberry harvest for the day! What a bountiful harvest it was! I had to go out after my nap so only went out once instead of my customary twice a day but I think I got all the ripe ones. Ken spent at least an hour out there cutting back more of the weeds and long grass around the bushes. This is so going to simplify my battle with the bushes and maybe even give me a bit more of an advantage. Right now I have tons of scratches on my arms! 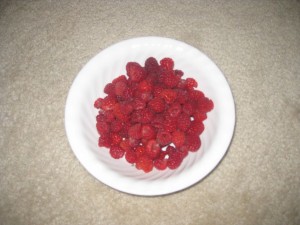 So as a reward for all his hardwork Ken pulled down our blender and took some of our strawberries, a little sugar and milk and made strawberry milk! Not my kind of beverage (unless you add some ice cream which we are not in the way of budgetting into the house right now) but all 4 of my boys thought it was delish! Supper was less of a success, I added chicken oxo to rice and well, EMANUEL LOVED it… everyone else… not so much… 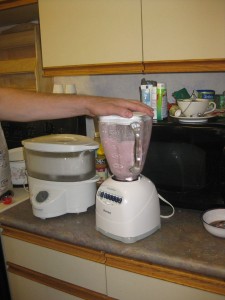 I have started the next Star Trek themed project! For my nephew and all done in *gulp* shiny braids and potentially blending filament… it will be the insignia from the Star Trek uniform and hopefully will turn out as well as Ken’s pattern makes it look. I am loving the help with design and am hoping to post the one I did for my sister in law (pattern that is) on the site to be downloaded and used very soon. The one for my cousin as well. No picture tonight but maybe tomorrow if Trinity lets me sew tonight? Her cough is keeping her up and she is rather demanding of the Mommy attention.

So for all the W’s (we are still Waiting on TWO things related to Ken – one should be resolved either way by the middle of August) today may have started out rocky but a surprise in the mail, tickets in hand and raspberries by the bowlful and I think I can handly the most difficult W of them all – Worrying – as Ken says something I am VERY good at, but you know what? Sharing my worries and talking to friends, admitting to fears and working through issues with Ken… well I am getting much better at letting go of that W and moving more into WAITING which is a little easier to deal with. After all sometimes the things we wait for are TERRIFIC right? Even SURPRISING! And who doesn’t love a surprise???

One thought on “Watching, Writing, Waiting and Worrying…”