…and Monday brings reality crashing right back down! Do you remember when the sound of the postman brought joy and excitement? At this point in my still youthful life I am finding each day brings me a feeling of minor dread at that sound. Today was no different and this time was actually appropriate. There are days where I wonder at the intelligence behind the decision to go to University to get a degree in… philosophy and religion only to end up married (happily mind you) with 4 kids and no concrete plans toward furthering that rather expensive education into something that would potentially mean I had a viable and well paid job. In fact, with my degree I need ANOTHER degree just to really do so!

Yes yes the government wants their money back and NOW… does the fact we have so little make much of a difference? Well, with the direct loans YES with the originals I had through an unnamed bank… not so much. Don’t get me wrong, I do not regret the experience OR the degree, it is just that right now it is hard to keep ones’ head above the water when the waves are cresting in. Add to that problems with payments made (yes we HAVE receits) one with a store card and the other with a bank credit card and I am about ready to hide under the nearest bed with a good book, a comfy blanket and a favourite teddy bear.

So I have said my prayers, sent out my positive thoughts and started a couple of hopeful money making ventures (my patterns with donations and the offer to stitch Tux for a fee for the non stitching peoples and Kijiji adds of baby clothes etc) with the intent of doing SOMETHING. I have good intentions and low expectations. I am certainly not comfortable sitting back and doing nothing (I think many people would say I NEVER am).

Anyway enough worried venting! How has  the REST of the day been (beyond the minor taint of the mail mess)… our morning started out a little slow. I was personally up later than planned so with the ability to sleep in a bit in the offering I took it. Getting the boys dressed took FOREVER – Emanuel is always a slow dresser but it certainly did NOT help when Trinity ran in and stole his pants… for some reason it offends him to get underwear on when the pants have been stolen… each and every piece of clothing has to be IN THE ROOM for him to wear… so of course I had to chase down the giggling baby and steal them back. This resulted in tears on HER end. Since the weather has cooled drastically there was the inevitable argument about shorts vs.jeans… All of this before 10 am.

We managed our letter of course… the letter U which Zander quickly recalled was “with Q.” Although our Currclick program had Uncle Sam as one of the examples so I just explained to the boys it is like Uncle James or Uncle Nathan or even Uncle Ted. It was all for nought anyway as the boys were MUCH more interested in the unicorn and umbrella. 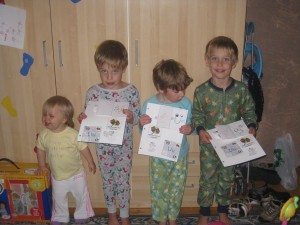 Emanuel, recognizing that there is a “u” in his name felt the urge to draw some of his own! Which was wonderful! 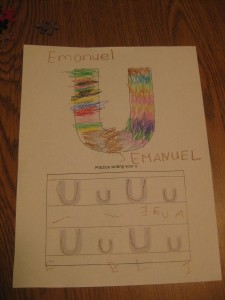 All the Little Individual Letters are Emanuel's

The next morning activity was to make up tiny books of shapes that the boys traced and coloured in and then drew a couple of their own. The twins had to write the names of the shapes they drew (of course they chose rectangles and were rather unimpressed by the length of the name!!!). I figured the brads were better than stapling so we could glue them down and they could kind of spin out the shapes. (Don’t worry I will link as much as I can after I am done the lapbook and can post the whole thing) 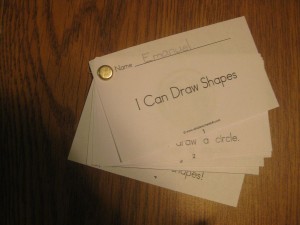 That was the extent of our morning. The boys wanted a quick run outside and then to head to the basement to play.. The afternoon was not overly better. Granted we got a few things done BUT the attitude in general of the boys – SUCKED.

I taught them the new song to the tune of The Farmer in the Dell about shapes. Emanuel especially LOVED that one! We had some dancing and singing in the livingroom before Zander knocked over Trinity and Emanuel had a fit… but we did have fun! 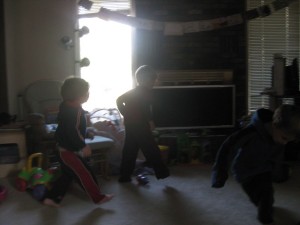 Caught Up In the Dance! (Gavin middle)

I sat all three of them down and we wrote a story about our Sunday. I love doing this as it gives you an idea as to what parts of the event “stick” in their mind and which kid really enjoyed what! Right now we write our story together but I am hoping in the next year or so to get down to doing it one on one and working with them to write it themselves!

We went to a museum. We played. We threw beanbags into different shaped holes. We played blocks and dominoes.

We helped make cookies and we looked at the stuff in the jars. We ate the cookies. We only at one.

We played with wood and made shingles. It was fun. We got to bring them home.

We did a craft. We made pictures out of beans and seeds. Emanuel made a fish and Uncle Sean helped him make a smile. Gavin made a rectangle and a square. Zander made a sun.

We also glued some more frames… this time using whatever colour they wanted. So that took the place of the colour experiment revisited I planned on doing today. Which is ok because it made time for the boys to do leaf rubbings tomorrow. Of course Ken spending half the day at the bank correcting THEIR error put a crimp in starting the insect lapbook. Apparently even with MY bill since it was HIM going in the teller decided NOT to put it through… wow UPSETTING! 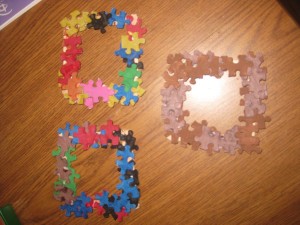 In Need of Glitter... Maybe Crystals?

So late dinner of leftovers tonight and big plans to catch up tomorrow. I am still feeling the remnants of frustration and a bit of sadness with the current reality we are once again thrown into. However, I am feeling truly blessed that Ken’s health is as terrific as it is right now! He is handling everything so well and is able to be a part of the family with a smile on his face (some of the time) and his temper in relative check. We are already light years ahead of where we were last time! I just need to keep reminding myself of that!

So I think what I need to do is remind myself that all this shall pass and trust in Ken. Right? 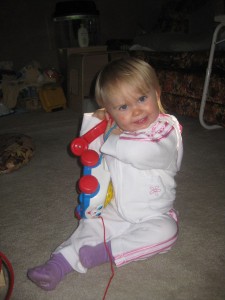 Feel Free to Call Us and Catch Up Anytime!