Well the first day of the new “regime” has gone over rather well… we are already seeing a lot more wet diapers, she is still not sure about this whole no soother thing but we are doing as much nursing as we can. I am already excited about the wet diaper results, now if we can just get her weight to bounce up with the banana/breastmilk mixture!! Ken is  going to weigh her on his own so I don’t start obsessing and I am just going to do the very best I can. 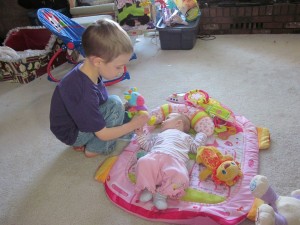 We have a new “toy” for Echo, Babies R Us had a 50% off sale on their Ocean Wonders swing – the version that is compact. So instead of paying 100.00 for a swing we spent around 60. She was rather impressed from the start. Not only does it swing, have her sitting somewhat upright and have a fish for her to look at it also does music with water sounds AND vibration. Our other swing was 6+ yrs old and dying so this is a wonderful addition to the clutter in our home. 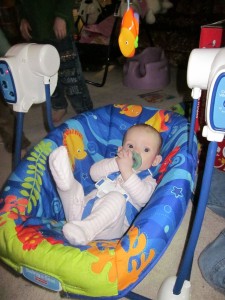 Since it is New Years Eve we decided to do our usual – friends over with their computers. This year not nearly so many people could come, so we are able to have everyone upstairs. Just our family (minus Zander) and Ted and Sean. 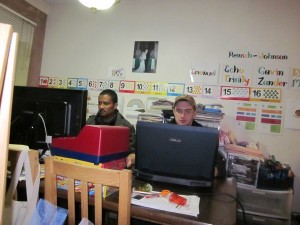 Computers at the ready

I am even letting the kids stay up as late as they can… barring bad behaviour. They are already  being spoiled with candy canes and Wii!! 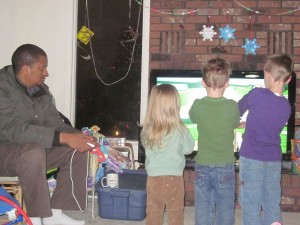 Trinity's wiimote had no batteries but she still "won"

I have started the post Christmas cleaning, but only enough to uncover our kitchen table from the festivities, I am still hoping to do some posed pictures in front of our tree before we tear it down, and the kids love their Christmas wall and counter top so I won’t be taking that apart until later next week. The next big thing to plan is Chinese New Years (we are trying to celebrate it each year – this will be our second year) and then the twins and Emanuel’s combined birthdays. There has been a rumour of a cake being made at Grandma and Grandpa’s house for the birthday party! I am excited to see what will come of that.

I have to say this year has been rough and frustrating at times, but there have been good moments as well – like Echo’s birth, this new old van, having the twins registered officially for homeschooling… In fact, I think it is safe to say 2010 is ending on a high note. After all we are all of relatively good health, together and mobile. Next year can only get better!

Now to go and ring in the New Year with 3 very hyper active children and a slightly fussy baby. Thank goodness Ken is home to help out! Happy New Years everyone!