Day 7 of Advent is here… and since it has been a WEEK of houses and crafts and things I figured I would share out little villages. 3 are garland style wall decorations and the 4th a standing village. They are so proud of each and every house and I am loving seeing their colouring styles and themes (Trinity is PINK PINK PINK) adapt and grow. Today was a Post Office – a must for any village!! 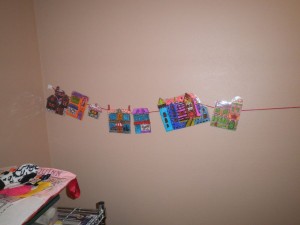 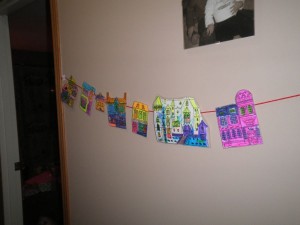 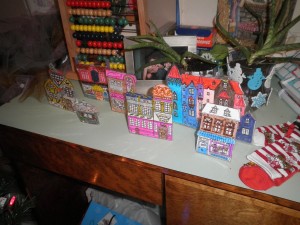 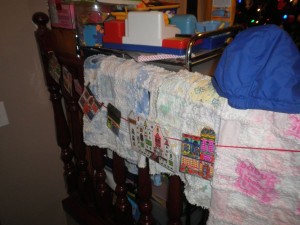 Emanuel’s handcrafted gift is officially completed… it is a matched set actually – a feltie ornament AND squeezable toy both of the subject of his choosing – an elephant! 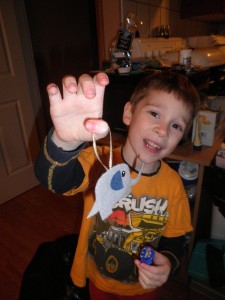 He knows about the ornament (it is now on the tree), but NOT the bigger version! 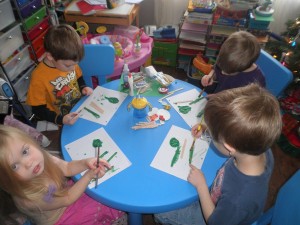 We had to alter the design slightly as we did not have corks to make the stands and instead make ours HANGING picture frames (oh and everyone added some glitter to their paint of course!).

We have had quite a few time outs to calm down over things… When we have a situation where all the kids are to do one thing and one of them pipes up that it is boring or they don’t want to (craft or not) it often spreads to the others and makes everything not fun so instead of dealing with it at the table I have been sending the boys responsible (amazingly enough the twins only today) to their room and letting them settle there. Hopefully this will work!

Family time today was a trip to Dollarama to spend this week’s allowance! We ended up with two KinderSurprise eggs (1.00 at the store!!), a bag of chocolate covered pretzels and a Hello Kitty tin (ok that was 2.00 but she is 3… and not really getting it yet). A few more necessities to completing gifts were bought as well as some snacks… but wow was it cold, and as always a bit of an ordeal to get ALL 5 kids out the door… but worth it! 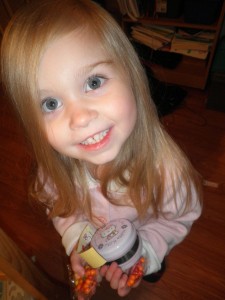 Hello Kitty at a steal

I made up a Dollarama version of this Candy Cane Vase. I used a glass instead of a full vase and the 1.00 boxes of candy canes coupled with ribbon I already had in the house. So my candy canes were not 100% uniform but the end result, I think, was rather nice. Next year I may try this with a bigger vase AND higher quality candy canes! 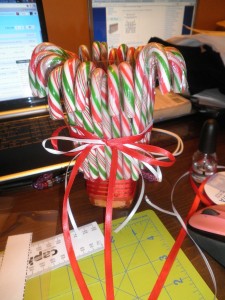 Today’s video is a craft that was included on our daily Advent Calendar page that we have not tried. Looks really neat though!

We are finishing our craft from today tomorrow as glue and paint needed to dry and tomorrow’s craft is one we are not interested in! Speaking of completed crafts… Gavin has decided to gift his very first cross stitch (though not an original design… I designed this one, his first finish though!) so we had to purchase a frame to finish it off completely. It just works doesn’t it? 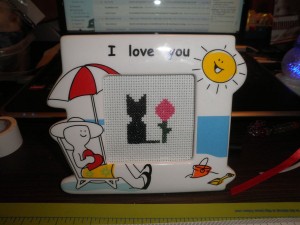 And now I get back to work on another last Christmas present! The kids are almost done!! But the list is still rather long… 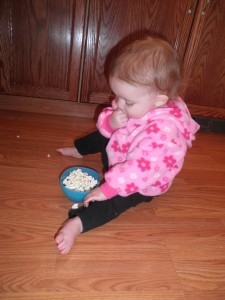 In which popcorn baby does minor yoga moves while munching