And so the Echo surgery saga ends… I am beyond relieved that it is all done now. I have not been so scared and in need of all the love, positive thoughts, prayers and hugs that were send my way in a very long time. And of course, as in all things related to the Reinsch-Johnson family the path the this surgery and the healing after was NOT smooth. So how to best tell the story… well I guess we start at the beginning.

Monday night the Chrises came to the house – one to drop off the car we borrowed to ensure safe travel (thanks He for the loan of your car!!) and the other to be here for Tuesday and begin her stint babysitting. We had a 12:30 am appointment in the Pre-Operation section off the pediatrics division in the city to drive to. This had us leaving the house around 10:30 to be safe. We still cut it REALLY close with Ken dropping myself and Echo and most of our stuff off at one of the entrances and then doing the usual drive a ton of blocks to find a free parking space.

Saying good bye to our sitter

Then there was a moment of panic when we went up to our normal cardiologist office only to find they had not record of our appointment and had to call around to figure out where we were supposed to be. The information Ken got over the phone when the appointment was made was not clear on which floor we needed to be on. they are both in the C section but our cardiologist is on the 4th floor and the pre-op was on the first. One above the other. Once they found out where we were supposed to go we headed back down to the main floor to register. 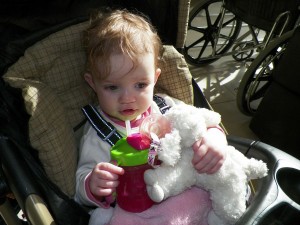 In the stroller and ready to be examined

Once we got there there was a lengthy form to fill out as well as some questions they asked before we even DID anything. There was a bit of an uproar over Echo’s long standing cough that had them bringing in the anesthesiologist to listen to her chest and check her breathing. If there had been an infection in her lower lungs that would have been the end of the surgery right there. Thankfully all of her coughing and phlegm movement was in the upper chest and they okay-ed us for surgery (as long as it did NOT get worse).  We also had to do the weigh and measure (she is officially over 18 lbs which may have been her threshold for this heart issue as the past week had us seeing her showing actual symptoms of her PDA), blood oxygen levels, temperature, blood pressure and all that fun stuff. 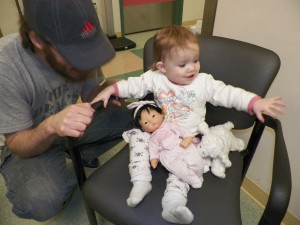 During that process we also agreed to be part of a study where they take a little extra blood during her surgery and keep it for data on heart issues. There is no benefit for her BUT for other children and it has us doing nothing extra. Ken and I agreed that it would be lovely to be able to assist other families, especially with no extra effort on our own part.

The last step was to head over and get blood taken. This is very important as with heart surgery they make sure to set aside blood for a transfusion in case of need. So they put a red bracelet on her ankle with a number on it that was NOT to be lost! She was a real trooper during the blood taking, I had KEN hold her for that one. With that final step done we had our time – 11:30am surgery which meant coming in at 10. No eating past midnight, no breastfeeding past 7:30am and no liquids after 8:30 (clear). So we packed back up and headed out the door. We gave the hospital our cell, home and the landline at the den Otter’s as they needed contact info. And that was that.

While waiting on Ken to get the car (he parked way out there remember) I noticed that I went from TONS of texts to… NONE! and then one from Telus stating that our special 2500 messages thing that we have going on each month did not have enough money in the account to update! Well that was WRONG, we had put the money in well in time for that the weekend previous. So it was time to hunt down a Starbucks and utilize their internets. Of course Ken was… agitated and told the person so so they were as helpful as possible. They fixed our messaging AND gave us 5 days of unlimited (I later figured out local to where the phone is at the time only) incoming calls. WHEW! We were back in contact business.

So then it was time to stop off at Bulk Barn to get treats for surgery time for the adults and munchies for the pre surgery meals for our pixie and then on to the den Otter’s house where Alan had come home early from work to meet us when we got there. And that is where all our carefully made plans just sort of blew up. 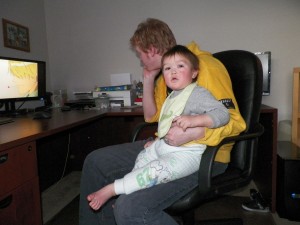 Apparently while we were sorting out our phone issues the Stollery had tried calling the cell and then moved on to our next contact number – the den Otters. Apparently there was an emergency case that came in that in turn bumped us from our Wednesday surgery time leaving us with two options – Thursday or the following week. Of course we did not make it home before the office closed. Thankfully the woman was back in at 6 am so all we could do was settle in at the den Otter’s and set an alarm to wake up early and get everything sorted out. 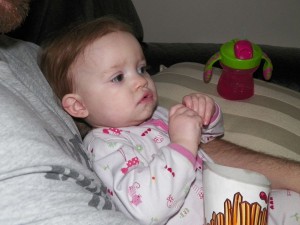 The baby with a temporary reprieve