Thursday was an overcast and cold morning… appropriate with what our day had in store. I was up BEFORE 4:30 am just due to nerves and Echo half waking up, so Ken, Echo and I snuggled in bed until I had to be up at 4:30 to shower and collect the pile of items we needed for our hospital adventure. And boy did we take A LOT! There was ALL of Echo’s buddies (Petite Sheepette, Alaskan Sock Monkey and dolly) as well as Fat Sheep and the puppy that plays Echo’s bedtime music. As well as the diaper bag, our snacks, the bag of “stuff to do” for Ken and myself, our overnight suitcase, the camera… the list goes on and on.

Ken “5 more minutes” himself into a rush but even so we were out the door by 5:15 and on our way to the hospital groggy baby in hand. It was a hard drive just with the anticipation of so much unknown and out of our control. The roads were pretty empty and we made good time and were there BEFORE 6. Which apparently meant NOTHING was open/unlocked. So we had to wait in the mezzanine.

15/20 min later it was time to go into the pre-op and get the ball rolling… VERY SLOWLY… We were the first of 3 families in the door and the first to be checked in. They had to remake her red bracelet that had her blood number on it (it was way too tight and we had to cut it off), check her heartrate, breathing, temperature etc etc. We had to put on the little pink striped pj’s and discuss her cough yet again! They also put the numbing cream on her hands and covered them with plastic to start the process for an IV. 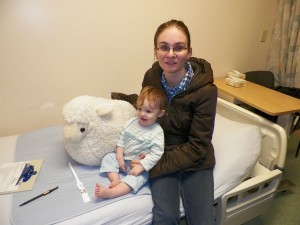 Can you tell Mommy was tired? 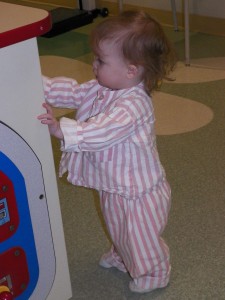 After all that fun stuff was done it was time to hurry up and wait (it was around 6:30 at this point), apparently we had to be escorted up to the surgery floor which is in the new heart institute wing of the hospital. BUT there were only two nurses in at the time and the 3rd not slated to be in until 7. So we had to wait  for the 3rd to come on. That gave Echo time to poop (yay disposables thank you hospital), play and Ken to sneak some quick naps.

At 7 we packed up our stuff and were off to the next stage… another hurry up and wait, this time in a rather small room. This one had so little room we had to crowd in our stroller and big glass doors. Echo was exhausted and fell asleep on me (I got the sole chair in the room) and Ken passed out for a while as well (he sat on the floor). The head anesthesiologist came in after we had been there about 30 min or so to talk about Echo’s cough (again!), explain that they were waiting on the surgeon and to ask if we had signed consent forms (nope). Then back to waiting.

Finally the surgeon stopped in at like at quarter to 8 and chatted and we got the forms signed. Then at 8/8:05 it was time to walk to the or. I took Echo personally. It was hard… they had this tiny bench to lay her on and since the numbing cream also shrinks veins on the hands they could not find a good vein… so it was the gas. She fought so hard, crying and wringing her hands as we held her still and then… limp… that scared me. She looked so tiny and so breakable. And then I had to leave…

Leaving her there was one of the hardest things I have ever done in my life. I had to rush myself out soother in hand so that I did not grab her and take her with me. The head anesthesiologist helped me find the main desk and Ken again thankfully where the receptionist handed me a whole box of tissues. Everyone was very understanding and no one made any sort of comment about how I should NOT cry (which is great cuz you could not have stopped me if you wanted to!). They have changed things a bit now – you don’t have to go and sit in a specific waiting room. Instead they take contact info (cell phone, etc) and give you a pager (looks a lot like the ones you get when waiting on a restaurant seating at The Mall) that works anywhere inside the hospital. We were quoted 2-4 hours on the length of surgery. And since I was so upset the receptionist made sure to call our cell to ensure we had the right number etc.

She gave us directions to the cafeteria the served breakfast and told us to not worry too much and off we went. After a rather sad and quiet breakfast that I have to admit I only picked at we decided to wait in the closest waiting area to the surgery. This one had multiple tvs all set to different channels, some comfy couches and a place where Ken could charge his netbook. Thankfully I brought STACKS of manga to read to keep my mind occupied. 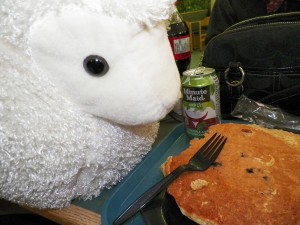 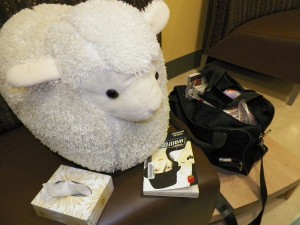 A bit of a surprise, but after only ONE hour we were paged back to the surgery floor. We wasted NO time and were there in minutes. They then had us sit in a little waiting room (one without beds and monitors) to wait and see the surgeon. This took some time too (I assume they call you with time to the end of the surgery as if you are anywhere in the hospital it can take time to get back) and Ken stole ANOTHER nap while we reminded ourselves that the receptionist said she came through just fine.

We waited for our surgeon for a while who then came in and discussed the surgery and her post op care. He said that she did very well, and that they ended up putting in the memory metal barbell shaped piece (apparently her open vein was shaped like a funnel). We have to keep her on one baby aspirin a day for 6 months, if we notice her bruising easily we go down to every other day. As well they found a minor upper chest infection on her right side so she is on 10 days of antibiotics. On top of that we come back in a month for a check up. She was still mildly sedated and needed to keep her legs straight for a while. He let us know that we would see him again before we left (with the next day being the hoped for date) and that she was ok and then it was time for MORE waiting.

Once whatever needed to be done was done and Echo was awake they brought us into the little glass door room we were in before to meet up with her again. Apparently she didn’t cry at all… until she saw us and then it was tears and a feeble attempt to get out of the bed. So into the bed went mommy to keep her still… and her legs straight. They wanted her legs straight until 1:30 (it was around 10 at this point). Thankfully she was kept somewhat sedated post surgery for a while so it actually wasn’t that difficult of a goal. I got to ride on the bed all the way to the wing she was to stay in over night. Poor baby was NOT happy. 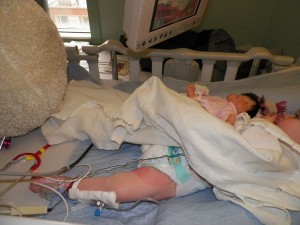 The iv... you can see the red from the stuff they put on to keep the area germ free

Her room had only two beds in it and when we got into it the second bed was for a newborn who left relatively soon after we were settled in. Each of the beds had a tv included. Ours was already set for Treehouse. They had to do the usual – heartrate, blood oxygen,  respiration and of course bloodpressure. Echo HATES having her bloodpressure taken. And with her iv in her foot she was rather cranky all round. They tried, it looked like, at least 5 places to get an iv in! 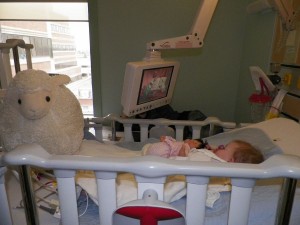 Poor Echo was groggy and lethargic for pretty much the rest of the day. Later on we ended up with a new roommate (a teenager who fractured her foot and needed surgery) but the day was rather quiet. We waited until it was past 1:30 and Echo could move a little more before we told Sean to come over and see her. He and Ken then went out to Subway to get me a late dinner. They don’t feed the parents after all, but there is a lovely little kitchenette with snacks for the kids in it so I was able to keep tempting Echo with different foods through out our time there. 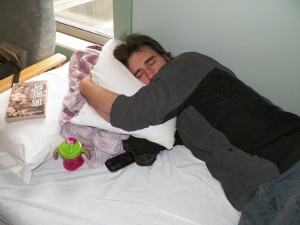 Ken napping on my bed

We really just spent the day focused on Echo. It was quiet with the nurses coming in from time to time to check on Echo and record things. We got to our room in time for Echo to have lunch (sort of… pick at) and then dinner… Ken stuck around until almost 8pm but he really couldn’t stay the night. That left Echo and myself to sort ourselves out. She didn’t fall asleep until past 9pm… 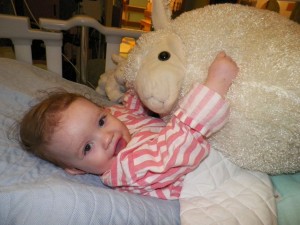 As a added snuggle buddy for our healing baby I also finished up one of the owls I had in my to do bag to give to her. Oh and put her YAY you made it through surgery bow on for some special photographs! 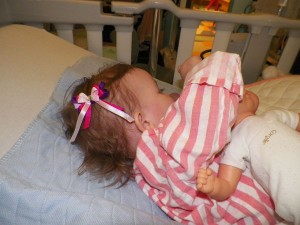 I tried to sleep before the 11pm check with the nurse but there was a baby on the ward that I later found out was basically starving itself for some unknown reason who was screaming for over an hour. Thankfully after 11 I was able to curl up and fall asleep. It was a bit of a hidden blessing that we DID have to wait a day for surgery. The weather took a turn for the nasty on Thursday with a fresh fall of snow. 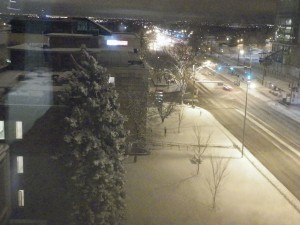 It was a very difficult day but Echo came through with flying colours and caused nurses to fall in love with her all over the place. I am so very thankful to EVERYONE at the hospital who had a hand in her diagnosis, surgery and recovery. Everyone has been so wonderful. I am equally thankful that this entire experience is to be a one time thing! 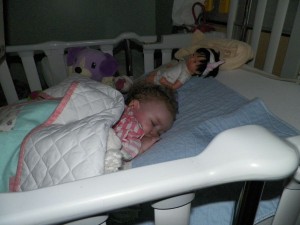 A sign our baby is getting better... she rolled over!

4 thoughts on “The Big Day”