And now we get to the near weekend… The weather has not been pretty come weekend, wind, rain (though not as much as projected), even some hail in our area… oh and don’t forget Saturday’s tornado warnings with at least two touch downs (out of our direct area thankfully). We have been trying to get through to the boys that even with the stresses and upsets of the past few months we have to deal with each other with respect, patience and understanding… on BOTH sides. Both of the twins have been going out of their way to find things to ask to do that they KNOW we can’t do… or at times when they cannot do them. I am hoping that this coming week I see some sort of a change in attitude, especially with my leaving on the 16th for almost a week to watch Kathy’s cats.

I really am hoping that this month marks the end of our moving Odyssey. I have done my best to continue with our teaching, to bring normal moments to the chaos and to be the best mother, husband, bestfriend, etc that I can be. I am not sure I will ever know if I have done a good job, or even ENOUGH of a job… all I know is that I have done my very BEST. I hope that the world and my family know that that is the most they can ask of me. I hope that the those same people feel that it is enough (well really that my FAMILY does, because really… in the long run my family is what matters… the rest of the world is all on the outside looking in).

Anyway, Friday… Friday marked the date we FINALLY got Emanuel that much sought after haircut. Zander rounded out the party as we were hoping Walmart would have their glasses area open. They did, but too long of a line up… that left me with 3 of the 5. Gavin and Trinity took time to work together on a special picture for Gavin’s book. Faeries and trees and sunshine all played a part. 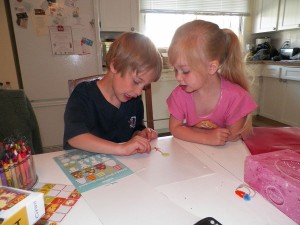 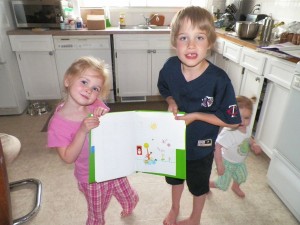 After the 3 menfolk returned there was further time for creativity. In honour of the glasses repair that wasn’t Zander created some replacement glasses out of pipcleaners. 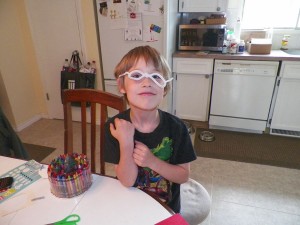 And Emanuel was a pro with his workbook. He looks so grown up with his new haircut! 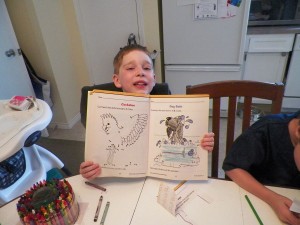 Add to all that adventure the fun of making biscuits with Grandma while waiting on Aunty Karyn’s arrival and the general school stuff for the day and it was a VERY good day! 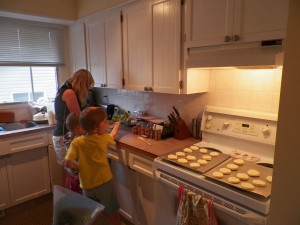 And then Saturday… and the craft sale!!! My first ever… and while we and my friend who was one of two people running the event were the only handcrafted tables we did ok. I sold one headband and 9 owls. Sadly we did not sell any of It’s a Hoot‘s friends’ items BUT Karyn and I are already debating the merits of a Farmer’s Market for something more in our… theme range? It was fun though, I saw friends from town, got in some good visiting AND got to hang out with Karyn. And while we didn’t sell tons, we DID get lots of compliments. 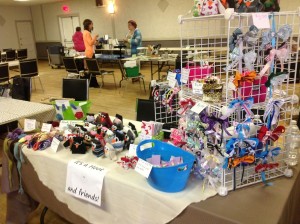 Which led to the OTHER promised treat… Trinity got to use that loonie she had been saving for… well a month or more… to buy a slurpee with her Aunty Karyn… that included riding in Karyn’s car, paying HERSELF and getting compliments from the staff at the convenience store on her purse, coin bank and outfit (the first two were Hello Kitty themed). 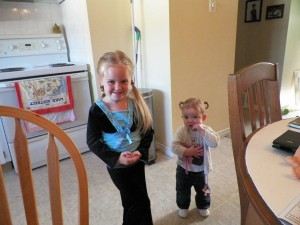 Dressed up special for slurpees

The kids were overjoyed to have time with their Aunty and had her hopping frogs for over an hour! 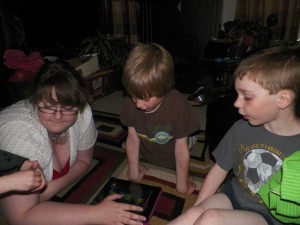 She and I got our outing after supper and putting the littles to bed… nothing fancy, McDonald’s and some minor window shopping but I think we both enjoyed it. It was hard saying goodbye again. We have been so spoiled in the past with weekday evening visits.

So that was my foray into selling my crafts… I definitely want to try it again!!! AND I reconnected with friends… made tentative plans for getting Ken out of the house with a friend (we wives can conspire). 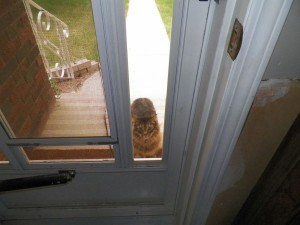 The cat who figured it should come in with Karyn