Time keeps ticking along… and with it our days and nights. Tuesday was an interesting combination of outside fun and inside schoolwork. Our morning was dedicated to learning… with our flag folders of course I had to get my hands on copies of the Pledge of Allegiance and the US National Anthem (first stanza). And with that their books are pretty well done. 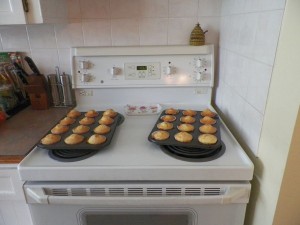 The piggy bank was finished as well… Daddy cut the slot and all of the kids had a go at adding stickers to the bottle. They are VERY proud of it. (Picture to follow eventually)

With Farmer Boy covered and some colouring and pictures created and lunch eaten the twins headed out to play in the pool… in the rain! Apparently that made it more fun? We had some thunder, no lightening and a warm rain so I figured why not. Besides, they had energy to burn and the others were all napping. (Though we did have a rogue Echo get into markers while we were busy and she coloured her hand and some of the carpet, thank goodness for vinegar water… came right out!) 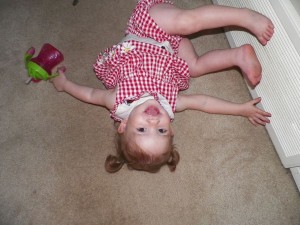 Such a naughty baby

We did have a mild issue regarding the tv Tuesday and had to unplug all of the sets in the kids’ rooms (Emanuel’s and the twins’). The easiest way to deal with that was to disconnect. What a great reinforcement that our choice to cancel our cable tv was the best one. Netflix and Crunchyroll are much more affordable AND less tempting as they have to get onto the laptop to get to it anyway. 2 days tv free. Though I allowed for the Weather Network for our schooling purposes and a movie when I went out on a walk in the evening… this time it was Echo and Gavin who joined in with Grandma and Gypsy. Most of the kids are getting over a bug so it was good for Echo to get some fresh air before bedtime. We got to see a train… actually had to WAIT on one as it stopped on the tracks for a few minutes before making an almighty noise and then moving on. 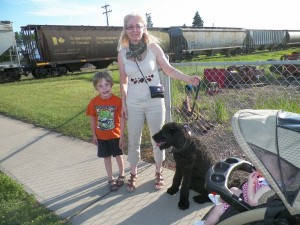 Waiting for the train

Oh and for those interested in Viking ships… a friend on Facebook linked me a site that was local to her! The Jorvik Viking Centre. Isn’t the internet grand!!

We are still dealing with acting out and loud children but at the same time, I think we are doing well… There are moments that I wonder if my norm, my kids are what others would see as acceptable. Or are we louder than most? More outrageous??

Wednesday was another slightly stalled day… Ken worked hard and long as Thursday AND Friday are implementation days for a couple of his contracts. This meshes badly with the viewings we are trying to set up, the going out for things to do and the general family time as it is. So we made do at home today. Except for in the evening when mom helped me out by driving me, Echo, Trinity and Emanuel to bedtime story time. We are missing the next week but going to the High Tea the following Wednesday. 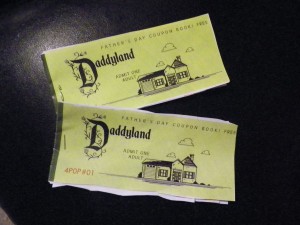 The craft at the library

Zander designed Gavin his very own colour by numbers! He worked really hard and figured out colour codes, though he DID copy the words off the sheets we bought, HE sounded out each one and wrote them out… I only had to help with the word gray. 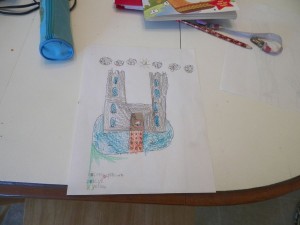 Of course the backyard was sunny for most of the day so where did the kids go but OUT! As much as they wanted, until I figured they were starting to get too much sun! 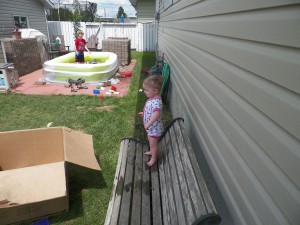 Fun in the backyard

Best way to end the day – HAIRCUTS for the twins! We are now all basically presentable… woohoo! Mom had to borrow her friend Ashley’s shaver set as we didn’t have our attachments on hand. Nice and short on both of them! 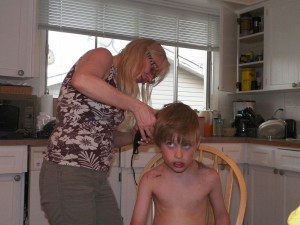 Cutting of the hair!

I have to apologize for my inconsistent updates as of late… my mind has been scattered and stressed lately. I have to say I REALLY appreciate how Ken is not only working full time but dealing with my insecurities (can you really blame me after last month’s ugh fest?), being a father and working with me to hunt the mighty rental. 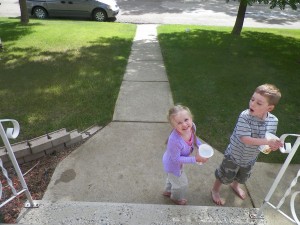