The second book in the Wishcraft series by Heather Blake, A Witch Before Dying is an absolute gem. You join Wishcrafter Darcy Merriweather as she helps her grandmother Ve run As You Wish, a special concierge service whose motto is “No job impossible”. What is a Wishcrafter you may ask? Well in the world of the Wishcraft series all witches have their own craft… Darcy is a wishcraft witch which means she is able to grant wishes, just never for herself or another wishcrafter.

In  this second installment we learn much more about the craft, the varied types, the rules and the elder that governs everyone. You meet more of the characters in Salem that truly are unique and wonderful. There is so much going on in this story… the planning for Ve’s wedding the the village’s optometrist, the cleaning of a fellow witch’s house… well her MOTHER’S house… and the Roving Stones rock and mineral show.

I love that Darcy is still learning about herself and the craft but at the same time is strong in personality and mind. She has young Mimi (daughter of the love interest Nick) to guide, her sister Harper across the street (who she raised from birth and who now runs a bookstore). There is a laundry list of people involved in the mysteries and multiple mysteries to solve. If you like a little magic with your mystery, adventure with a touch of romance and a cast of interesting characters… well A Witch Before Dying is for you! Just be sure to read the first book in the series first: It Takes a Witch. 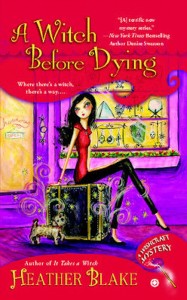 A Witch Before Dying

One thought on “A Wishcraft Mystery”