While not a special day for the kids… but for Ken, very much so. With the cabbage rolls created the day before it was time to move onto potato soup and “gunk”… another Johnson family tradition. There are so many special things Ken has talked about EVERY year and things we truly could not recreate without the presence of his parents. It has been over a decade since Ken has last gotten to have Christmas with his parents, instead he has spent it with us and my family. Special, but definitely NOT the same. 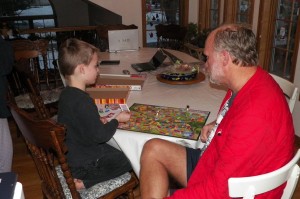 Zander playing Candyland with Baba… somehow the instructions did NOT make it from Canada!

We have two days of family coming up… Christmas Eve will be spent with Ken’s mom’s brother and his family (they have two kids) here at the house with Christmas Eve dinner – the potato soup, cabbage rolls and gunk… we have not seen them since moving here as Ken’s uncle has been a little under the weather. Then on Christmas Day we have Ken’s brother and his family AND Ken’s dad’s sister and HER family. (Jim, Judy and kids) I think dinner will be ham! YUM! 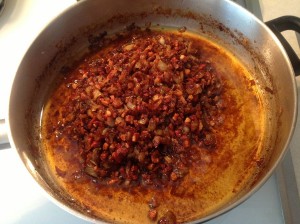 Gunk… I am told it is “to go on top of everything”… trust me NOT healthy! 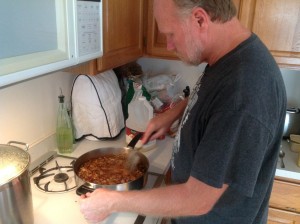 The kids have expressed a little bit of sadness over missing some of the traditions and people we have left behind but we are so thankful to get to have these chances in Minnesota to really get to know and BE with the family from Ken’s side. We have been so lucky to be able to come here and live with Ken’s parents and take the time to find a real and stable life here in the USA. There is still lots to be done and hurdles to be jumped but we are starting to have a home again and that is a very precious gift. 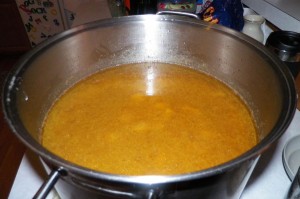 The day before the day before Christmas has been a quiet one for the kids out of necessity. School stuff is put away, cleaning is being done… and most importantly to the kids — cookies are iced!! Butter icing on sugar cookies with sprinkles and M&M’s… though it was bemoaned that they are NOT the same as Smarties (Canadian, not those candy things). 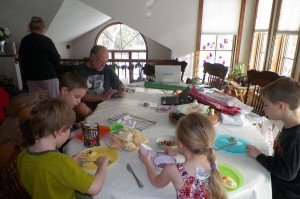 In the meantime Ken and his mom had some bonding time on the iPads with a “jelly game.” It is looking like AFTER the new year these comfortable moments are going to be less often… at least during the week… for KEN… but I can’t say anything until January has begun so check back on that one!! 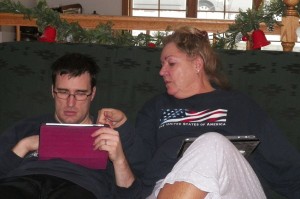 We sent most of the kids outside to play a bit in the afternoon but really I don’t think anyone is too motivated to do much more than wait for the Christmas festivities to begin, though the twins and I did vacuum the basement and tidy up toys and excess things that were out and in the way. 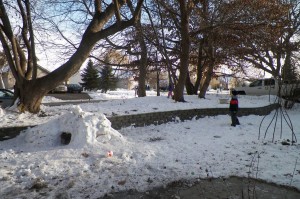 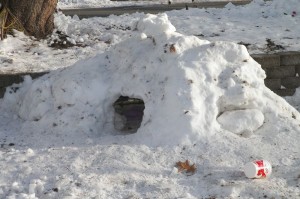 A close up of the structure in the front yard

We ended the night with POLISH sausage (yum) and then some traditional Christmas movies for the kids (thanks again Sharon) and we are READY for Christmas Eve! 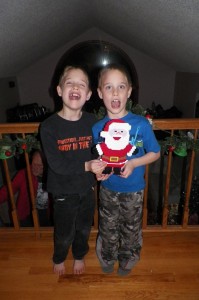