Well, after finishing by Hounded Kevin Hearne, there was nothing to do but get the second book in the Iron Druid Chronicles – Hexed. Back to the world of an Irish Druid, his apprentice and his wolfhound (Oberon is STILL my favourite character)… don’t forget the widow down the street (another absolute gem) and Atticus’ lawyers – a vampire and a werewolf… the list goes on and on, so many amazing and hilarious characters in this series. I have grown firmly attached to them all.

Hexed, as you get a hint of in the name, deals more with witches this time round. Two warring factions, in fact. Now is as good a time as any to remind you to READ THESE IN ORDER, much of the conflict has bearing on past conflicts both resolved and unresolved… oh and it is also good to note… EVERYONE seems to dislike THOR in this universe…

Hexed, like Hounded, is a terrific mix of occult, adventure, humour and general shenanigans. Atticus, the main character, while being basically immortal is flawed and rather human. His friends and associates are equally as flawed and individual. No one is a perfect being, god, demon or other… rather it is a world of super humans, humans and more all trying to find their handhold on the powers available. I will warn you, sex, violence and some adult language is encountered in this book… but there isn’t the crass detail that I personally dislike.

The Iron Druid Chronicles is (at least by the second book) a well thought out and executed series of books. I find that I am sucked in almost immediately. It is relatively easy to follow the characters (though I did get confused on a few of the witches and their names but that may have just been inattention on my side), and equally as easy to find yourself deep into the book while the chores and other humdrum life items pile up around you. I do what to emphasize once again – READ IN ORDER! But what a wonderful continuation to a series that has not yet disappointed. I look forward to getting my hands on the third installment – Hammered and see what all the fuss is about Thor! 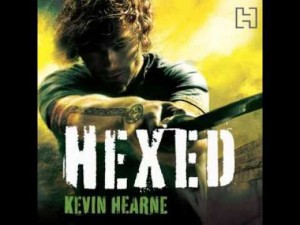 Well, weather is warming and fingers are busy with a selection of various projects. Reading has slipped just a bit. BUT I have managed to finish the third book in the Miss Peregrine’s Peculiar Children… Library of Souls (by Ransom Riggs). Now I must warn you… this is an impossible book to review without putting forth information regarding the first two books… and you really MUST read them in order!

Dramatic and at times heart rending, Library of Souls is full of action and angst, friendship and betrayal, love and pain. One of the things I love and hate about this book is the confusion that runs through it. There are so many possible allies and enemies. The world is a dark place in book #3 where the entirety of Peculiardom is in upheaval and distress. The Ymbrynes are all abducted, the peculiars dead, taken or destroyed by a need for what is later shown to be essence of other peculiar’s “second soul” which acts much like an addictive drug.

In this dark and dangerous scenario are Emma and Jacob and Addison the peculiar dog. There is something absolutely lovable about Addison… There are so many other characters… and so many amazing pictures to put faces to descriptions. That really is the key to these books, Ransom Riggs has such a touch and eye to combining amazing images to enthralling words.

Book 1 was an introduction to the world, a hint a the troubles… book 2 threw us into danger and intrigue, book 3 brings us full circle to even more new and unique loops and worlds that defy imagination. Library of Souls is a dark book, but it is a book of hope and possible redemption. It is a book of adventure and battle and decisions made under pressure.

Emma shook her head. “Doubt is the pinprick in the life raft.”

I don’t know why but that resonates with me. I hope that you will hunt down these books at your local bookstore or library, they are well worth it… Go, jump into the world of the peculiar! 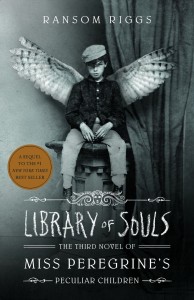 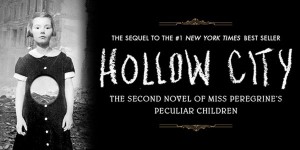