Ken’s training is easier and easier to deal with at the kids settle into the idea of longer periods of time without Daddy at easy reach. We kept busy with school and just general hanging out. 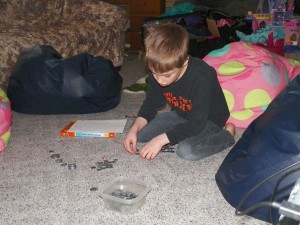 The 18th marked the end of of the first week of training. I don’t think Ken learned much but he did not feel it was time wasting. For us, Friday was our last projected nice day… so my plan was – SEND THEM OUTSIDE!!!! 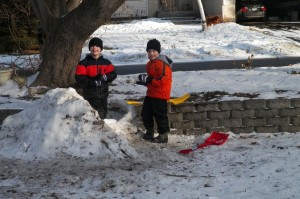 Of course we still had other things to do – spelling tests… dinosaurs… Emanuel made his own tally of what we have covered to date. 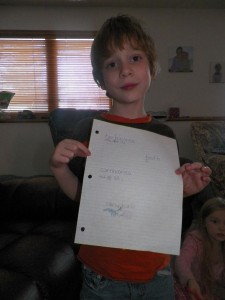 Herbivore, Carnivore… and both

We also rolled hotdogs in crescent rolls to make lunch with Nana! The kids loved it! 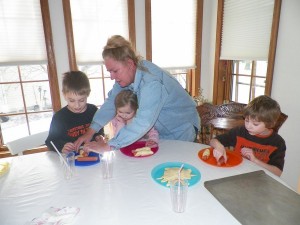 We finished our evening with a dance party… being restrained is NOT the way of our kids!! 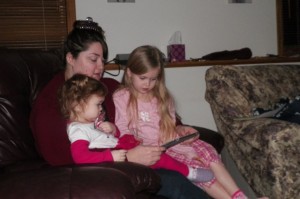 On the 19th we had our last full day with Karyn… and with Ken and Bree’s help we made it a busy and fun one! We hit Mall of America on a rather busy day and shopped our hearts out. 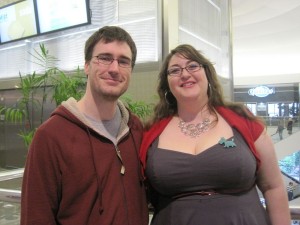 Add in lunch at an Italian restaurant when we first got into the mall. 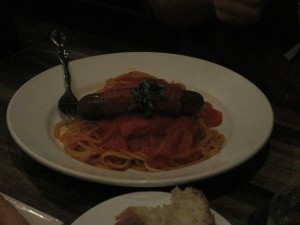 And supper at BW3’s and we had great food, great company and some AWESOME deals. 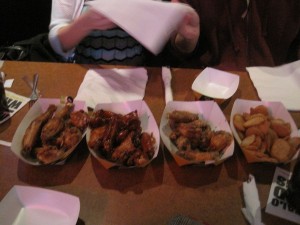 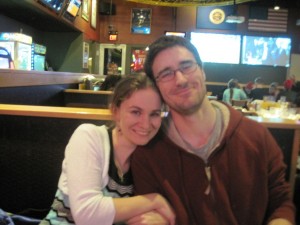 I can truly say my Christmas money is well gone and spent. At MOA I got EVERYTHING I purchased ON SALE. Including my most unexpected purchase – a dress from an amazing store called Bettie Page! Bree and I are totally going back to play around and buy dresses later in the year. So much gorgeous! 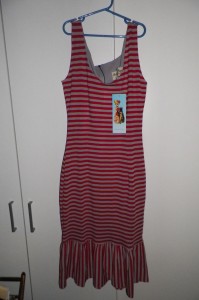 I am not sure when I will do a model of it to take a picture of but I LOVE the shape of this dress!

We stopped in at a real hat store, perused the books at Barnes and Noble and tried on bras at Victoria’s Secret. I picked up a set of headphones from Typo for a mere 10.00. I love the look of the buds but they really do hurt my ears. 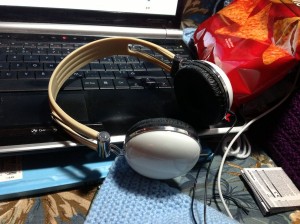 So our very last day together with Karyn was pretty much kid free… we got out, about and around. I am so glad that we did! 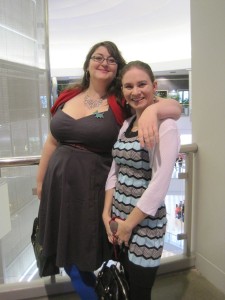 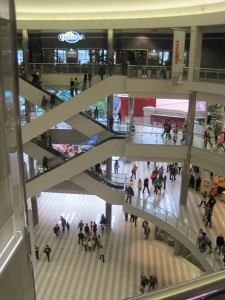 If you have 5 kids and a free hubby (DONE DONE DONE his contracts) what should you do? Well if you are a homeschooling family… you start like you did the day before – breakfast and then right into the review books and letters to the people who have stepped up to be our pen pals. Right now they don’t really understand how much work they WON’T be doing once we get all the first letters out but we are working down out list quite doggedly. Some even people the boys have never met before!! 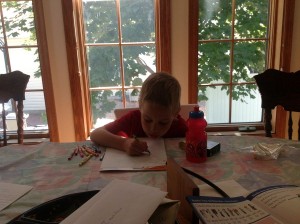 Hard at work at a letter/picture (Gavin)

Now with the schooling out of the way, the kids dressed and the husband not tied to the computer beyond his morning’s job hunt (go Ken go!!) what to do? Well there was this promised LONG awaited outing… Victoria Secret and my first proper bra fitting and purchase of a proper NON nursing bra in over 9 years!! We had coupons that had come to the house in the mail recently and I ended up SAVING 120.00 while spending well under 100 and within the allotted budget… how so? Well we ended up with close enough to the target amount to get this really nice travel bag… which is also ALL of Lisa’s Secrets you will see… Victoria lets hers all hang out, me… not so much! 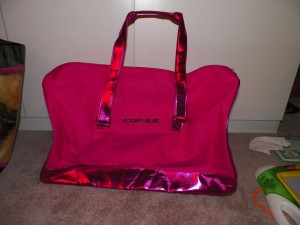 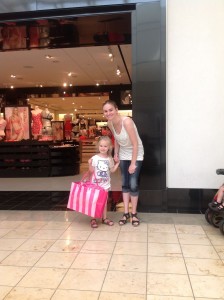 In front of the store. All Trinity wanted was the bag it all came in!

After VS it was time to drive around and keep an eye peeled for MORE garage sales… check back at an old haunt and show the kids more of the beauty of the area. I have decided that next week or so we shall start collecting pictures of interesting street signs… trust me there are some REAL giggles.

So now I have TWO new books to read… AND a list of suggestions (I had already read some but so neat how Barnes and Nobles does that!). 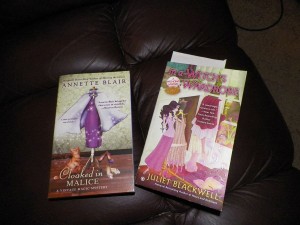 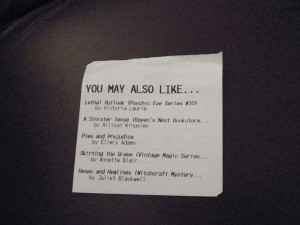 We had to make a stop off at a gaming store we remembered from years back that had moved to a NEW location that was HUGE so that the kids could each get a die. They do love having dice around! At 1.50 a piece certainly no hardship. Oh but don’t forget about lunch – TACO BELL! 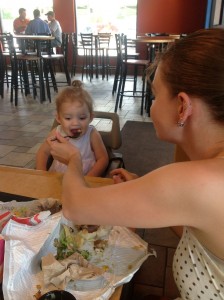 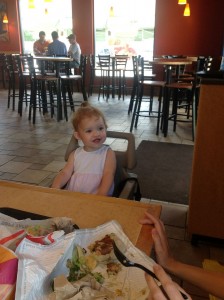 This marked the beginning of our solo weekend. Nana and Baba headed off with Ken’s brother Joe and his family to camp for the weekend. We opted to stick around here so that we could work on some discipline issues, enjoy each other’s company and sort through a few more items we have laying around. Ken’s folks picked up some storage for our bedroom so I was able to further organize… and everyone knows how happy that makes me!!! 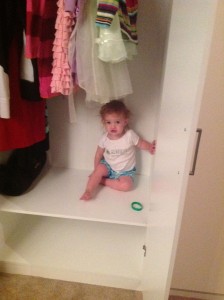 Echo checking out from the inside out

We had a slow start to Friday as I finally have a more minor version of the rest of the family’s cold. But we did get out the door in the afternoon… for the ever magic garage sales (more squinkies and a spelling boardgame) and then the main attraction for the day – once we found it (two parks named the same on different streets in the same town???) – Andrew’s baseball game. The first of the tournament. 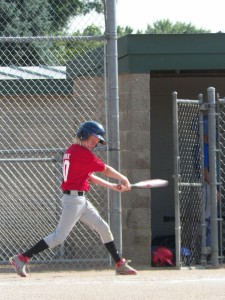 Another very hot day so the kids were a little fussy but we had a blast! Ken took pictures, Echo played with her Anthony and the boys played at the park. We always have fun with the Novaks. 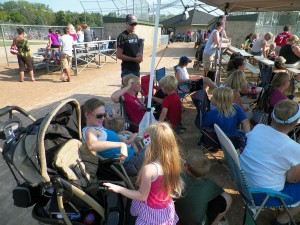 Watching from some shade 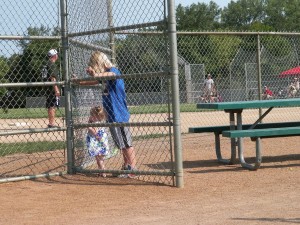 Echo and her Anthony

Andrew’s team won! And on that positive note we said see you LATER (that still brings a smile to my face) and headed off down the backroads home. We lucked out on our travels and came across ANOTHER garage sale… this one with everything for 25cents!! I picked up a zipper up sweater (just needed a wash), a push/ride car that we had up north and sold (seriously a QUARTER!) and a car that came with dominoes that turned out to be a gem. You fill the car and then let it go and it sets dominoes in a line!!! 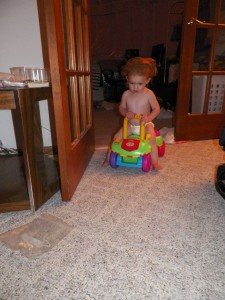 She was so excited she wouldn’t let me put her pj’s on before she got onto it!

Don’t forget a stop off at Sam’s Club and an attempt at Slurpee in the form of a Coke flavoured Icee… head’s up… it is NOT the same thing!!! 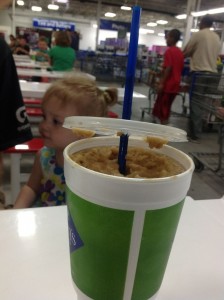 In the end the kids were pleased, we got to spend the day with friends and that night Ken and I sat around and did nothing! I just hope the rest of the family is having as much fun camping!!! 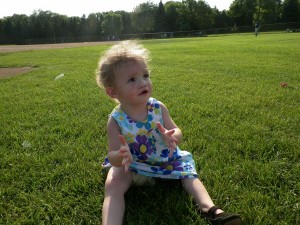 Cheering for our best boys!