Yup still got these old Dino posts… enjoy the flashback to resources once used!

3 guesses where this dinosaur was found… and the first two don’t count! Yup, found in the 90’s in Utah, USA, this bipedal carnivore is thought to be one of the largest raptors. One of the dromaeosaurs, this lightweight dinosaur was potentially a warm blooded dinosaur and more like a mammal than most. I had a special sheet for us to fill in information about this carnivore from Activity Village HERE. With razor sharp teeth and massive claws this predator was quite the fearsome creature found in the Cretaceous period.

Now for our video! Walking with Dinosaurs thanks to WWDinosaursLive.

And the rest of our links:

Today’s dinosaur was found near the town of Muttaburra in Australia. This Cretaceous period dinosaur was an herbivore with a large nasal passage that it is believed would have made it one of the loudest dinosaurs. Some believe that it could have potentially eaten some meat as well! It is one of the most complete dinosaurs found in Australia and has some of the same features as an iguana. We had two videos for this Australian dinosaur… the first was from the I’m a Dinosaur series.

The other From Latrobe University.

Australia certainly has had many unusual animals on its continent both past and present. For links we start with Animal Planet HERE. KidsDinos has charts and a map HERE. The National Dinosaur Museum has a lengthy article that while we did not read the whole thing we did skim it HERE. Of course the Australian Museum mentions our dinosaur HERE. Dinosaurs.about.com has a page HERE. Dino Fact File has a short piece HERE. EnchantedLearning has a fact sheet HERE. Our colouring sheet is from HERE and of course Wiki has their say HERE. 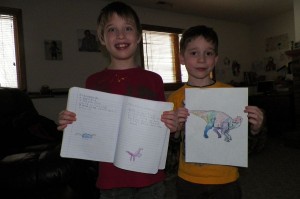 Working with his big brother

We shopped until we almost dropped today… so sorry just a dinosaur! Regular catch up will return soon!

So lately the dinosaurs have had very interesting names. This carnivore that was found in clay was believed to have been washed out to sea. It is considered a medium sized dinosaur and potentially the largest carnivore in the Jurassic period in Europe. In fact, scientists believe that this dinosaur hunted along the beaches for fish. We have one video for this dinosaur which suits the knowledge that only ONE skeleton has ever been found! Of course, from I’m a Dinosaur!

Now for the links, they are limited but interesting! Let’s start with Dino Fact File HERE. KidsDinos.com has its usual helpful charts and map HERE. EnchantedLearning has a fact sheet HERE. Dinosaurs.about.com has some points of interest HERE. Dinosaur King has a great comparison the dinosaur to a human being HERE. Primevel Wikia has an article HERE, apparently it was a part of an episode on their show! There is a longer article about this European dinosaur HERE from Wiki. And our print out to colour was found on DeviantArt HERE. 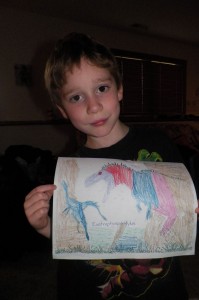