Our newest focus of interest for school is a new one… we have turned our learning to all things AUSTRALIAN! This was precipitated by having some wonderful penpals who live in Australia… add to that multiple facebook and egroup friends who ALSO come from this continent and we were ready to jump in with both feet.

I have to admit I came into this knowing a lot of the stereotypical things… Vegemite is a favourite food, Sydney has a wicked looking opera house, Aboriginal art is fantastic… But I have personally learned so much! Every day there is something new and the kids have been over the moon with their wish to share daily facts and nuggets of information.

I am going to share out resources a little differently with this one. We have our list of books which I will share, and some main websites… but a lot of our information came from friends and general web inquires. I don’t plan on sharing each and every site we used, but I will highlight some I found amazingly useful of course. I will also share out outline of topics covered. I tried to vary them as much as possible and give the kids a range of simple and complicated questions to answer with the intent that if they found something they loved learning about (ie. animals of Australia) we could always go a wee bit further with that.

Of course we had a laundry list of books and DVDs but I will try and share as many as I can… starting with books!

I do like to, even when we are not actually creating a lapbook per say, use the resources. I glue them onto flat pages and we still use the flapbooks etc for a bit of a change up from the written and typed reports. Homeschool Share has one HERE. The same group has a Coral Reef lapbook we found useful HERE. Not all helpful resources are free ones, though I did not spend much on this unit out of necessity. We paid 1.50 US for a Great Barrier Reef lapbook by Only Passionate Curiosity HERE. Iman’s Home-School has a helpful page with links that we used HERE, again lapbook. DIY Homeschooler has a unit study set up with links  to different resources HERE. Homeschool Creations has their own study set out HERE. Those are basically the links for the pages that could let you run an independent unit of varying sizes. We took bits and pieces out of all of these.

Of course we also enjoy art and crafts. Our book was Super Simple Australian Art by Alex Kuskowski. It is a great reference and most of the projects used things around the house. For more ideas we had some websites to check out… A sugar glider brown paperbag puppet HERE thanks to Beatrice the Biologist… Activity Village has a whole series of Australian Animal crafts HERE… The Craft Train had a fun frilled lizard out of toilet paper rolls we didn’t quite get right but enjoyed trying out HERE, there are 9 crafts to choose from on Suzie’s Home Education Ideas page

Of course we covered dinosaurs… Emanuel would not let that pass us by. I won’t hunt them all down for  you but the book I listed in the book list (Minmi) is our basis and we used these two links for report pages… one by Sammy Ironleggs HERE which is free and the other by Kelly Lynch also free HERE. Dinosaur Zoo Live has a great resource with a list of Australian dinosaurs and print outs. I picked and chose out of this one HERE. It is a download and save right off the bat. I did find the information at Walking With Dinosaurs HERE interesting though.

One of our best resources was For Teachers For Students HERE. It is a resource site for Australian education and educators. Look up the specific states and territories and each has a great series of fact sheets.

Ok now for topics… we did a rather broad overview but here is a list of some we touched on and loved.

So all in all give Australia a good look. We enjoyed it extensively thanks to all of our Australian friends. Sorry this took so long to get up! I hope the resources are helpful! 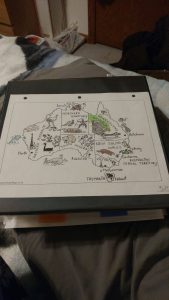 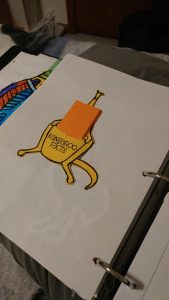 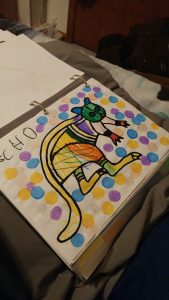 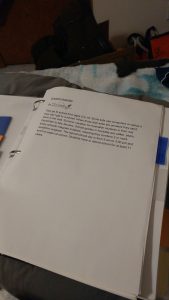 OH MY GOSH they are so young in the picture at the bottom of the post… which means this is a LONG belated post but at the same time I squeeeee at the adorableness… so that makes it all cool, right???

Another day another dino another herbivore from the Cretaceous period. The Struthiosaurus is an armoured dinosaur that was the smallest of the ankylosaurs (found to date). Found in Europe it is quite the impressive prey… well armoured, and low to the ground… not an easy target. 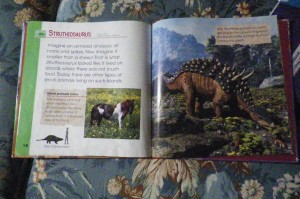 Out of the book

Our video included an image of our dinosaur but was not overly educational otherwise.

A new month begun and spring is… well I am told it is here but the weather is simply NOT working in our favour. 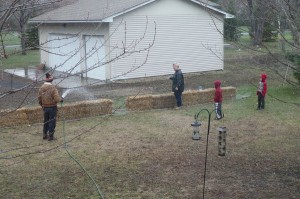 That did not stop garden progress though!

We had THREE Wild Kratts to enjoy!!! 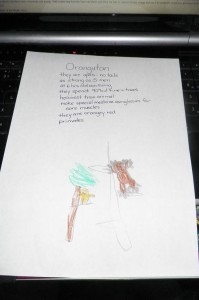 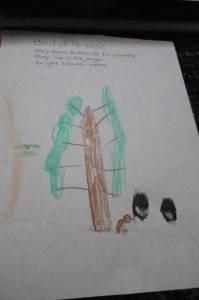 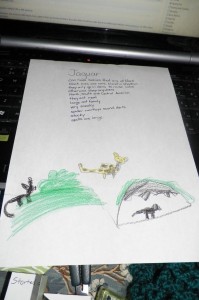 It was the first of the month so time to get our May poster put together! 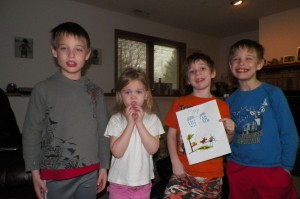 And on our fact hunt about penguins realized that they can go up to 4 months without food, and are actually classified as seabirds, though unlike other birds their bones are dense and heavy instead of hollow… thus the amazing speeds in water! Penguins by Lynn M. Stone has been a great resource. 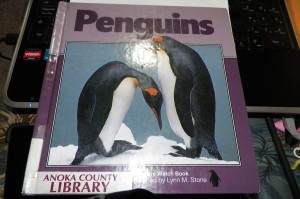 Our Thursday dinosaur was inspired by a library book: Neovenator and other Dinosaurs of Europe by Dougal Dixon. We have already had to move our dinosaurs from a small binder to a D ring! 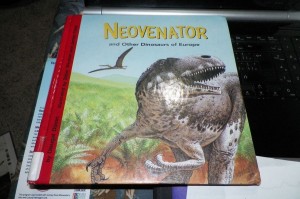 Monday’s had our intrepid learners drawing their favourite dinosaurs. Trinity had to have some help but we are working on getting her outside of the kitty and girl box. 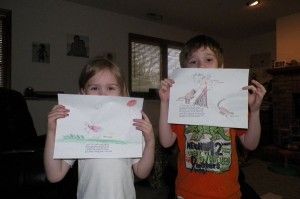 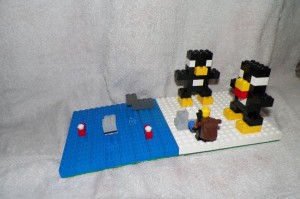 I love it that from time to time we are even having some moments of silence and contentment WITH electronics in play! 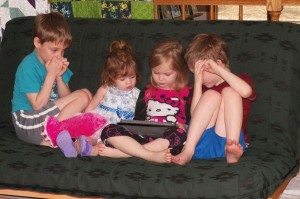 We had a series of interesting drawing suggestions from Art for Kids as well – all about ROBOTS!! The boys worked together to complete them all and made a rather interesting robot selection. 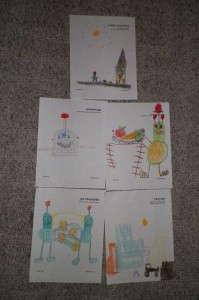 Mr. Popper and his penguins started in Seattle so we had to take a look at a tourist video (that honestly they were not as enthused about as I would hope but loved parts of) and see what there is to see in Seattle NOW.

We ended the week with less than favourable weather… so I pulled all the stops for lunch – hot chocolate, tomato soup and grilled cheese sandwiches!! 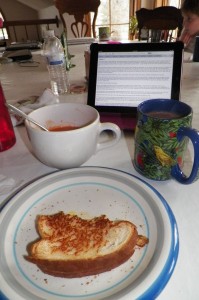 Our dinosaurs ended the week as a marathon event of free (with Amazon Prime) season 1 episodes from Dinosaur Train alternating with schoolwork accomplished. Emanuel worked on a lovely full page scene. 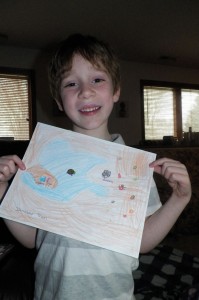 Quite the well thought out scene

We created our own advertisements for portions of Mr. Popper’s Penguins! 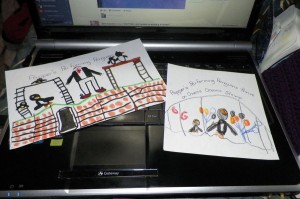 And then for supper, the kids helped me make pizzas. 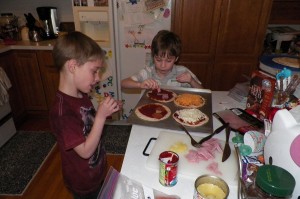 It was a rather good 3 days leading into what was going to be a busy busy weekend. 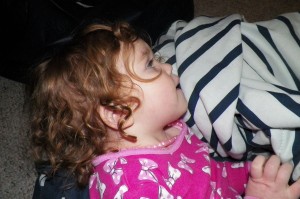