Another delayed post… but interesting all the same. I hope they are helpful to someone and of nothing else, a wonderful record of times when the kids and I had fun learning about something new and just a bit unique.

While 2014 has not had us digging deep into the dinosaur world like we have, we did find the time to learn all about this Australian herbivore. The Minmi is named after a water body in Australia and is one of the most complete sets of fossils. Things like stomach content, skin texture and all sorts of fine details are saved in the fossils. It is believed that this dinosaur was often washed to sea and preserved as it was definitely a 4 legged land mammal.

Emanuel found this dinosaur most interesting due to its many armored plates and its obvious herbivore nature. We had a great discussion about where Australia is and how this was NOT a large armored dinosaur. Now we did have a rather interesting video by La Trobe University. Australian Dinosaur – Minmi.

And the links were actually plentiful on this dinosaur:

Woo this is a long sitting still post. I figure I might as well post these up!!! So while I recoup from a weekend of packing a friend to move, Memorial Day family time and other random over scheduling enjoy some dinosaur information that we did up way too too long ago with our dino fiend!

Emanuel has moved his interest to the oceans with marine reptiles and their unique visages. The Schonisaurus is a rather interesting looking carnivore. Found in the Triassic period it has an amazing number of fossils laying around. With razor sharp teeth and an elongated face this massive creature would have dominated the oceans though potentially was NOT a fast moving predator…

And now for videos… Check out The Largest Carnivorous Predator in Prehistory.

Catch a glimpse of our massive marine reptile on the commercial for 3D Sea Rex.

And now for the links:

Now here is a wickedly cool carnivore with an interesting CURRENT history as well! Now, don’t get your hopes up, that does NOT mean it is alive and well here… rather that WW II affected this dinosaur personally! In fact, the only decent bones found of this dinosaur with AMAZING spine pieces was destroyed in an air raid! What we are left with are the photographs of the display that was on the wall in the museum in Munich.

This giant carnivore was larger than a Tyrannosaurus Rex, and rather unique with its sail like spine and its crocodile-esque head. This predator did not  use its teeth to tear apart its victims but rather flung them around much like a crocodile. Its size was immense, its shape fearsome. What an amazing biped! Though there is some thought that they could have occasionally walked on 4 legs. Add a diet of meat AND fish and you have quite the amazing dinosaur. Our first video is a series of them with Discovery. You have to watch it on the site HERE. 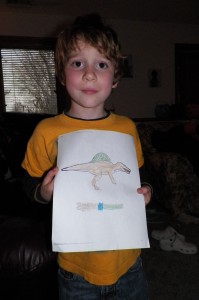 Discovery Dinosaur has the point form version of the video… you can find that HERE. Dinosaurs.about.com includes information about those destroyed fossils HERE. Jurassic Park has a neat Wikia page HERE. EnchantedLearning has a fact page HERE. BBC has a great picture of the Spinosaur, though the media did not work when clicked on HERE. Science kids has a great illustration of the person to dinosaur ratio HERE. Kidsdigdinos has a nice page BUT their fact question has this dinosaur as SMALLER than the T Rex where everything we read and saw stated otherwise HERE. Kiddinos, as usual has the map and the timeline showing it is a Cretaceous period dinosaur HERE. BigActivities.com has our printout HERE. And of course Wiki has their usual HERE. And now for our second video: