Zander’s animal choice was LIONS! So of course we had to find all that we could about where they live, what they do and how they survive. I hope these are helpful!

And I came across this lovely ones of Kenyan children dancing.

We had two more from Esther that she deemed interesting… the kids agreed! First, A Lion Pride – Introducing Daddy to the Cubs by BBC Wildlife

And the other… Lion Pride in Kenya, Africa by Brian’s Art for Animals. 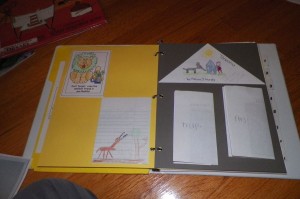 Some days I feel the urge to write a blog entry called A Foreigner in a Foreign Land… maybe Canadian Abroad is better? A Maple Leaf Adrift in a Sea of Red White and Blue?

Now there are those who would beg to differ… it is just Canada and the US, aren’t they the same thing? To those naysayers I say… YAH RIGHT! Any country that is a country on its own right is so for a reason… It is individual and independent and while things may be similar there ARE differences. English may be spoken and written here predominantly BUT I personally write using the Queen’s spelling (I do love to spell colour with a U). I have an accent I am told (and am proud of… eh)… but the differences continue from there…

For the first 33 years of my life I lived in various towns and cities in Alberta… we followed my dad around as he went from Wheat Pool to Wheat Pool (elevator as they were known) as he worked for the now defunct Alberta Wheat Pool (the name really DOES say it all). At the time of my parent’s divorce oh so many, many years ago that slowed down. But I like to think I saw some culture along the way. We lived in tiny villages of 200 all the way up to a minor city. One of my favourite villages was right outside of one of the Native Reservations. I have fond memories of going to events on the Reservation with a friend… as I ran free until dark in the village each night.

That was my life for much of my childhood, every 2-4 years we would move on to a new location until I hit grade 11. My life has moved onto creating a group of friends who in turn helped me create traditions and lifestyle choices that not only reflected our shared (for the most part) Canadian heritage but other countries as well. I cherish my roots in other’s history, our love of all things Chinese, the palate enhancing spices from Ethiopia, my first taste of that lovely strong tea from Kenya…

That lovely patchwork quilt of poutine and slurpees… chopstick and mitmitma… Charlie and Lola and Pocoyo… Chinese New Year celebrated right alongside the boys’ birthdays and Valentine’s Day… I miss that. I miss the idea of Canada Day… all that red and white and maple leafs… I miss U’s in words, I miss the discussions about English and French signs… I miss… I miss Canada…

I miss the British comedy and the people who watched it with me… it is just not the same on my own… I miss Celsius and Kilometers… Centimeters and Millimeters… Postal Codes… Thanksgiving where it belongs… on a weekend in November! Family Day (in Alberta at least)… that holiday in February.

There are days when I feel like I should have my backpack with a maple leaf on the back and a travel book… like I really am not ever going to understand this new country of mine and truly fit in like a puzzle piece in its proper slot. The colours on the flags are wrong (well the addition of a third colour)… the holiday decorations (which show up WAY too early in the year for the July 4th celebrations) make me laugh and miss the simple maple leaf… seriously “Uncle Sam” in all his glory to stand on your yard… I have seen them, like scarecrows! I miss Tim Hortons (yes yes stereotypical but seriously… CANADIAN INSTITUTION!!) and Superstore (the home of the Fat Sheep around Easter)… I miss things I never thought I would… some of the morning stations that start with the Canadian anthem… license plates only on the back of vehicles… Hockey Night in Canada (and I HATE hockey)… curling (without people snickering when you mention having played it sober).

It is amazing the little things  that get a raised eyebrow… GRAVY ON FRIES??? (oh dear god if you suggest adding delicious cheese to that mix!)… try arguing the RE ER in theatre… or theater… oh dear it begins!

I remember back when we were in University at Augustana and Ken, then the foreigner in a strange land attempted to join the foreign students club only to be turned away for not being “foreign enough”. This became a running giggle among our Canadian friends… the idea that you must LOOK foreign or have a distinct accent. The idea that the colour of your skin could designate you being foreign… that would make the Native Americans foreign and last I checked… they were here first???

So I feel rather silly admitting I don’t know how the medical system works, that I honestly prefer the U’s in words… but at the same time… being Canadian is a large part of my (and the kids’) identity… it makes up a large portion of who we are… sometimes makes life more confusing and often more interesting. Who else but someone NOT American can go about and be a tourist and mean it? Which makes my taking pictures of things like Mall of America’s sign, odd street signs, random local sights quite ok! I will hold onto that excuse for YEARS! Watch me!

So when you come to my house in the future (still hoping for not too distant!!) and see that one maple leaf in a sea of stars… well remember, we are all foreign to something so the only choice is to revel in the differences and create a life of combining the amazing (like our Chinese New Year celebration) with the comforting (poutine and maple syrup… but not together… no NEVER together). 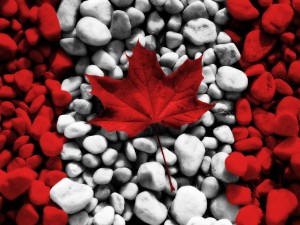 Image thanks to Kootation.com. HERE