Even with all the chaos and frustration we are keeping up with our studies. Yesterday the kids and I read Harold and the Purple Crayon. Then the twins drew a picture using one crayon colour like Harold does. (Trinity and Emanuel went off the garden path and simply were creative) There is a series based on the book on Netflix so during some of their not outside in the sunshine time they watched that as well. 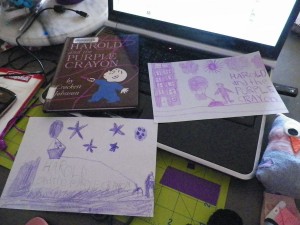 We have been at work with our math some more as well, though somewhat grudgingly. I am a little concerned about how they are going to react once we get settled and organized and REALLY have to push into our learning. We have accomplished an awful lot though, both boys are reading much more fluently… writing better… thinking on their own with much better results and the progress in math is very positive! 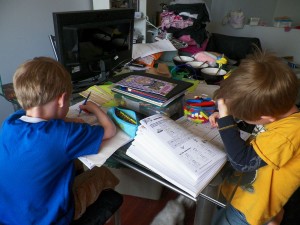 We are continuing with Farmer Boy chapter by chapter. I have also printed out some lapbook mini books to do up when we have some time. The main focus is on reading the story and comprehending what happened in the chapters. This is our first long chapter story and the boys’ attention is a little variable but we are getting through it bit by bit.

I have found a couple of educational apps for the kids that are going over REALLY well! First off is a favourite of Trinity’s called Old McDonald’s Farm. She loves spinning the wheel. And then there is the one that Gavin loves Kiko. He has far surpassed my ability on there. Echo’s favourite has to be Meet Biscuit. A new favourite for the kids that I recently loaded up is Edge.

I have been creating more and more sock owls lately… I have bodies ready for features and wings just waiting for me. I did, however, finish one today. Which I think turned out rather cute! 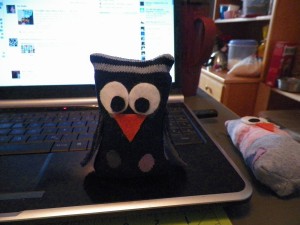 As of tonight the van saga has reached its peak with the purchase of… A VAN! We still need to do permanent registration and all that after Echo’s follow up appointment (and are leaving for the city super early in case of police pulling us over – you put the transport sticker in the window but that may not be noticeable enough in the morning after all! But it is a huge thing off our list!

That means we now have transportation to the doctor tomorrow AND then onto friend’s for two nights… then Comic Con! My first  ever! Then… well Sunday night will take some figuring out and we still have to check in one last time with the owner of the new rental regarding the 1st BUT tonight it is YAY van time! Thanks to Karyn that is!

That leaves me with tonight to collect enough stuff for the next half week. Clothing and probably some school supplies for Thursday. Friday the boys are so excited – they get time with our nephew! It has been a while! I am going to spend the rest of the week focused on the moment… we get to go and show everyone how well our Echo has been doing and give the hospital our thank you card. The kids worked rather hard on it and are very proud to be able to give it to them. I added in a picture of Echo and wrote a little thank you. I hope they like it.

Today was a bit of a special day – it was She Chris’ birthday! We had homemade hamburgers and CAKE! Harley Davidson cake. Total noms. I made her a change purse and hair thing out of the cupcake duct tape. 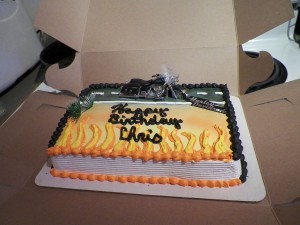 With Ken getting a HAIRCUT… a van… and then a birthday girl in the house… today can be categorized as a GOOD day! 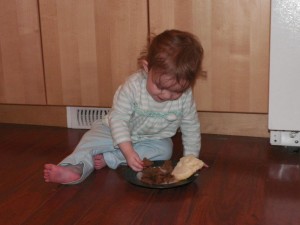 Echo and her burger