So Discovery’s Shark Week has come and we got all caught up in the madness. I was liberal with my choices in taping for the kids and prewatched a few first (Submarine the massively huge shark special was deleted quickly) but we certainly got our fill on some excellent and not so excellent shows. I will include our watched list including one lucky Dirty Jobs find on Animal Planet that week. Just remember, some are more… ratings grabbers than truly educational pieces… though we found ANYTHING narrated by Mike Rowe was a goldmine for the kids. Of course, we fell in love with him on Dirty Jobs and the kids want to watch anything with him or his voice on it!

We watched quite a few shows

We also branched out with some very brief reading on some lesser known sharks to write on the back of some shark images we printed from one of our saved files. I am including these sharks here:

Of course we went to our usual sources for Shark print outs etc and while we did not DO  a lot of crafts and settled instead for drawing our own pictures and having fun “what if” discussions we do have some links to help you out on your shark themed learning!

For spelling words we started out the week with 10 general shark words:

For the second week I took the list of 10 most dangerous sharks from Angel Fire site HERE. For Trinity and Emanuel I just did two random shark related words a day. Emanuel’s favourite was hammer and head… the moment he said the two together he just lit up!

With some of the worksheets there were questions about shark anatomy. I found a decent list of fin information on the site KidCyber.com HERE.

We looked up two different terms for our studies… breaching where we  took the definition off the top of our good search HERE. Out second term was opportunistic feeders. We found our definition on the Merriam Webster site HERE.

We also did a quick animal report on the Remora. We figured we wanted to know more about this fish we continually saw in almost all of our Discovery channel shows. Sadly not much is known about certain aspects of the fish, BUT the site Animal Diversity Web had some interesting (if not complicated) information for us to use on our report HERE.

Emanuel has had an interest in the Cookiecutter Sharks since he saw them on Octonauts (HERE). So we did up a colouring page thanks to KidsPlayColor.com HERE. We used the information on EnchantedLearning HERE to do a quick write up on the back of our colouring page to include in our shark book. With over 200 species I am figure we will continue finding sharks of interest over the years!

We didn’t do much in the way of books as there was SO MUCH Discovery Channel content, but I did pull what we had on sharks out of our personal collection:

I certainly hope all of this information can be of some help! Good luck! 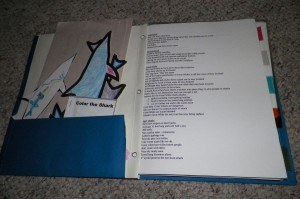 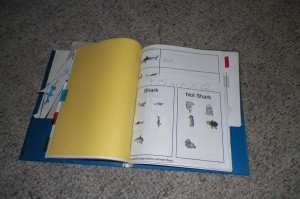 As I have mentioned before Emanuel does love his herbivores… so we moved onto the Ankylosaurus. These armour plated dinosaurs are 4 legged tanks. Club tailed and spike covered, they really are a visual joy for the herbivore loving dinosaur fanatic. Now let’s get onto our videos…First the ever requested I’m a Dinosaur.

Our second video didn’t make the cut with Emanuel, he simply could not sit through it today, BUT it is about dinosaur bones found in the province we used to live in and dealt with the Tyrell Museum (another favourite of the family).

That leads us to the links… Found at the end of the Cretaceous period we had a few good links to share with you. Science Kids has some nice images including the skull and bone structure HERE. Kids National Geographic has a short blurb and an image HERE. Discovery Dinosaur Central as a lengthy article with lots of interesting information HERE. We always love Kidsdinos.com and their charts HERE. Why not check out a site dedicated to the Ankylosaur HERE? Dinosaurs.about.com has a list of the connected dinosaurs HERE. Wiki has an article HERE, and of course there is the colouring page from HelloKids.com HERE. 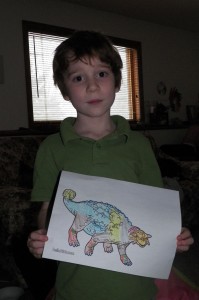