Well the heat wave has seemed to be at a temporary (at least) end… last night we got a nice storm that while it cooled down the area also soaked the kids’ sand (they SAY the lid was on the turtle box but I DO have my doubts). Regardless they had a sand soup and were LOVING it! Even better for the Mommy was the fact they kept said sand OUTSIDE! In fact, all 3 remained relatively clean for a large portion of the day… if you DON’T count lunch!

Ok so lunch… a great success and MY idea! Something we have NOT had here in the Reinsch-Johnson home since we were forced to tighten our financial belt and refrain from eating out or ordering in – PIZZA! And not just any pizza but HOMEMADE pizza made on a pita for a crust! Homemade by each boy… what a treat… cooking and art class all rolled into one! Our ingredients were simple as I am using what I have in the house (and the pitas we bought at H&W for like $1.75 for 7). So Ken took our can of tomatoe paste and added garlic salt and italiano seasoning and warmed it up. We grated whatever cheese we had in the house (something that has now moved up the priority list to have in the house on a consistent basis since Miss T decided she liked it!) and cut up some of the ham slices (so affordable to buy at the Wholesale place in a nice large package). 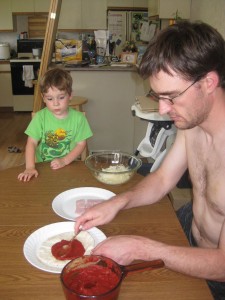 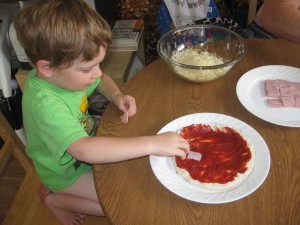 There Was CAREFUL Ham Application 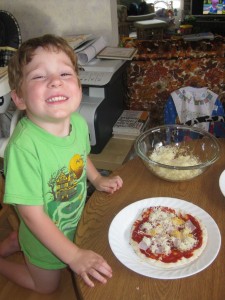 And a Large Degree of Proudness For The Placement of Cheese! 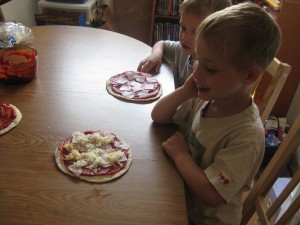 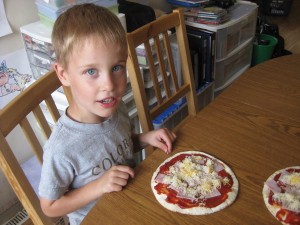 Gavin and His Interpretation On Pizza :) 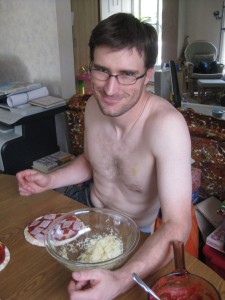 Then each boy did his own… first ham of course and then cheese… and then into the oven for about 5 min at 325 F. Nice and crispie with the cheese nicely melted. Each boy had his very own pizza to spread all over his face. Tummies were full and smiles were abundant and I, myself also enjoyed the very special treat. Definitley a do over for this family! 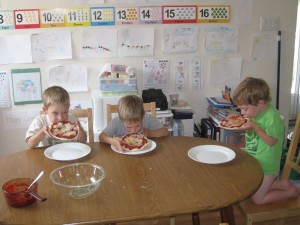 Now our hot baby… last night Trinity woke up radiating heat. We moved her into our bed and she managed to take over over half of it pushing me down to the end and basically taking over the pillows. So Ken was sent to the livingroom to make do. Even today while her arms and legs were not too warm the rest of her was rather warm to the touch. She had a nap in her crib this afternoon and some good meals and even a little cat nap on daddy in the basement but needed some tylenol before bed. She woke up for 30 min to cry and complain but so far has been asleep. I am hoping this is just a one day sort of bug as she gets quite miserable when sick. Not to mention pushy… she doesn’t want anyone anywhere and will come right up and shove you! At least  tomorrow is another basically at home day – though we plan to go for a family walk. 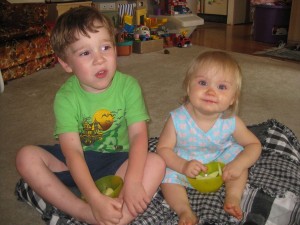 Apples to Settle The Tummy

I have come to the realization that there was a REAL reason why my Light Effects (DMC) were put aside… they are ANNOYING to work with.. slippery and testy and my very own new nemesis! I really hope my sister in law LOVES purple and shiny as man did I have to fight the thread. I think the biggest issue was the fact that I have not worked with this type of floss in months. I am sorely out of practice… but don’t get me wrong that does NOT mean I want to dive right in and work with it tons, but I really should do more projects with “the shiny” the result IS rather cool.  I just have to decide if I want to outline the silly thing with MORE shiny (I do believe the sister in law has mentioned silver) or leave it as is… what do you all think? Then there was the saying… oh dear that stupid “T” in Batman hated me for a moment… the pattern Ken made up had a space like you would assume if you only counted the x’s BUT visually it looked wrong so out that had to come… here’s hoping the next line goes off without a hitch! I already have a friend lined up to try and design me a little shape to go at the bottom of my brother’s saying and Ken is going to work on my nephew’s design very soon… I hope! 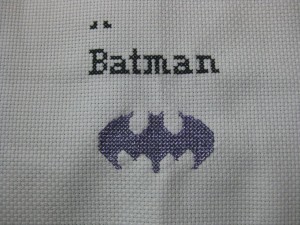 Bat Nemesis AKA Light Effects E155.. I Thwarted You!

Hmm what a boring day in retrospect… I got a nice full bowl of raspberries and met my first goal of a decent sized container in the freezer. Ken is planning on cutting back more of the weeds so I stop getting attacked when I go to pick. Tomorrow is another cleaning day… I want to get this cross stitch done and try and get our bedroom sorted a bit better. I figure the boys can work on numbers or letters in their dry erase books as I have yet to make a “Reinsch-Johnson” poster to match the other ones on the wall of their first names. Though I think I will just teach them to spell Johnson first. I believe that could be an adventure and a half!

I do have a cute picture of the day… to cool Trinity off before Ken ran out to the store he took her out the front door for a little walk to see the grass and whatnot. I am so proud of my hubby and his love for his kids! What more can I ask for – a man who loves and cares for all of us, without feeling tied  down and frustrated, who WANTS to have a family the same size as me (5 kids for those who wish to know though be warned #5 is NOT any time soon! We are young, we have time so chill everyone!), who thinks I am beautiful even when I feel shabby and believes that no sacrifice is too great for his family. While not a saint he is close enough for me! And a sarcastic  ass to boot! My American Penny… though worth WAY more than that to me! 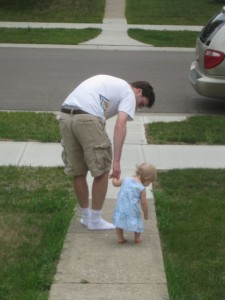 Daddy and His Davine Little Girl