Confusion cleared up and facilitator seen! He went to the wrong street… there are like 3 houses (including ours) who have the same number on their house but a different street!!! And when he called our phone Ken must not have heard it and our voice mail acted up again. BUT he made it today. It was a great visit and left us feeling rather confident. The expectations are not scary high but they are set out and in front of us. Our boys are going to rock it! 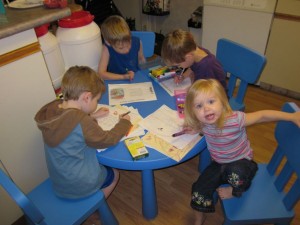 So after another late night last night (for some reason I couldn’t sleep and then HEAD ACHE), and up early (for me and Echo) so Ken could run out with Nathan (thank you so much!!) to pick up what IS in at the Education Station from our order… LAMINATOR!! Perfect timing as I need to laminate and assemble our Math Mini Office! 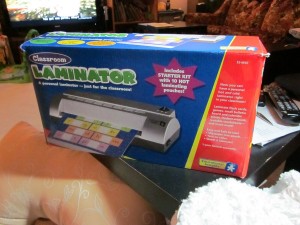 I got in a nice afternoon snuggle with Echo before we got the call that our facilitator (Randy) was coming over. Thankfully the house was still relatively neat and tidy from our previous clean up. He was very supportive and able to give us a good idea of his expectations. (as indicated above).

Once Randy headed out Ken went back to the pc (poor man lost a few hours today – another late night for him) and the kids outside. What gorgeous weather. I wish we had the van (well for many reasons) so we could go out to find a nice road with tons of leaves and take pictures. Fingers crossed we get that chance soon! 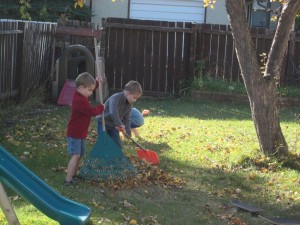 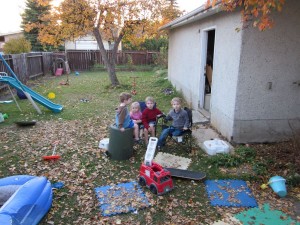 I also got my official notification of my sister’s upcoming wedding – a lovely postcard. I really wish we could make it but it is all the way down in South Carolina and that is NOT a cheap flight OR a simple drive. Apparently their location can only hold 50 for the wedding anyway and as we number SEVEN… well… but I am so happy for her and hoping to get started on a gift for them. At least I have until May 2011. Wedding samplers and baby samplers are some of my favourite things to design. 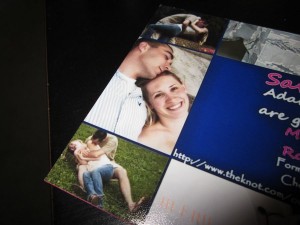 Part of the postcard

So tonight hopefully we will get some school stuff sorted… a decent night’s sleep maybe? I can dream right? And tomorrow a more fleshed out blog entry – PROMISE! 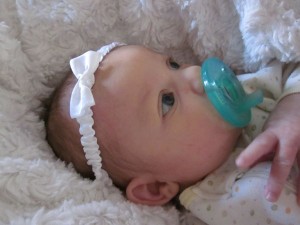 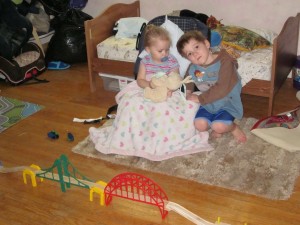 The queen on her throne?

All that work and getting up early (for us) this morning and the facilitator was a no show! Ken left a message on his phone after an hour had passed and tomorrow will call our board personally to see what happened. So Echo and I had a late morning/early afternoon nap while the kids did what we had planned originally for the time the facilitator was here – Play Doh. First was the free for all, make what you like and then they did some dinosaur work before running out of time before lunchtime. 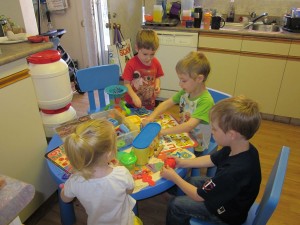 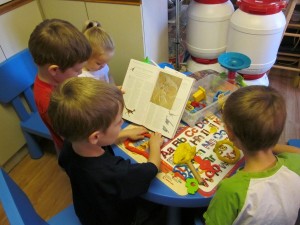 Dinosaurs from the book (Zander green)

Yesterday was a relatively slow day too – lots of cleaning and prep work. But the kids did worksheets of course. 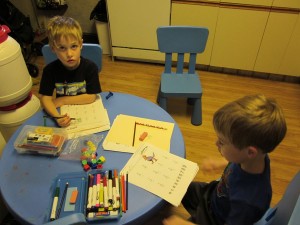 Back to the sheets (Gavin right)

And Gavin worked on his apple lapbook… it is fun going over those apple facts again, especially since right now we are finishing up on our applesauce. 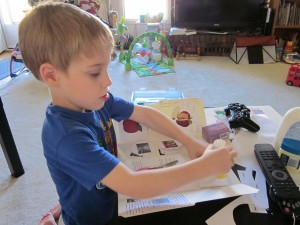 To celebrate that we all got together and started a few batches of the apple leather. I am planning on defrosting some raspberries or strawberries and mixing them in with the applesauce to try and make something more “fruit roll up” like. At least I can control the sugar content. 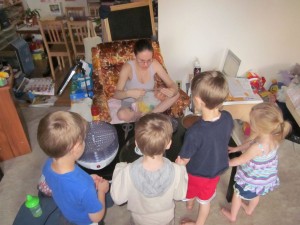 Setting up the leather (Gavin left)

Zander and Trinity took advantage of the lovely fall weather and did some leaf raking, not enough yet to do any true pile jumping though. 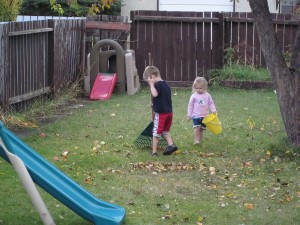 Last night’s treat for myself and Ken: chocolate with white chocolate chip cookies and milk! We had bought cookie dough from my mom when her work did a fund raising drive and this is my tub. SOOO good, especially coupled with episode 3 of Sherlock… although it ended on a cliffhanger and wiki says no new episodes until Autumn… 2011!!! 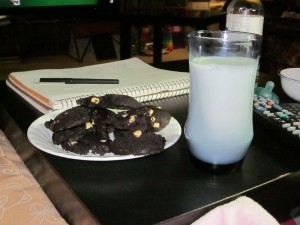 I even got a scrapbook page done – this one is from our trip to the conservatory – Emanuel’s flower art! 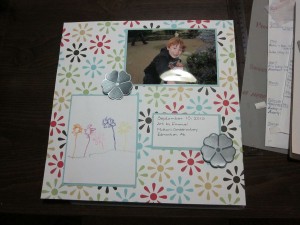 The rest of today was pretty basic – though the twins got sent to their room for a nap. When Ken was in charge they would not listen and play quietly and attempted to wake up their siblings so they were sent  to bed. This meant that when Trinity woke up from her nap she was the first one up and got her very own livingroom snack picnic. 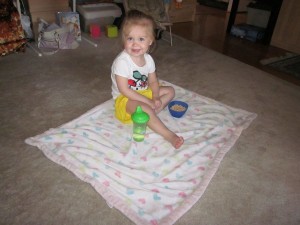 Emanuel did some more workbook work too – the letter J and things you would find at a market… His focus is limited but when we do do our pages he is soaking it up. Trinity likes to come and watch so it is my hope that she is actually taking in a lot of it too. 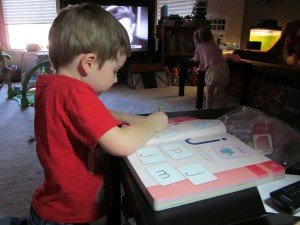 Since we have not gotten word on the van yet Ken had to contact Sean and catch a ride to run some errands. Man do I miss the mobility. With such a large family we simply can’t go out with a friend and the bus… I cringe to think of all these kids on the bus. BUT if it comes down to it, you do what you have to!

I finished up a headband for Echo using the bra strap material I bought on the weekend and a butterfly embellishment I had from doing a tutu for another little girl. Now I just need some more “fancy things” to add to other straps and I will make her a few more! 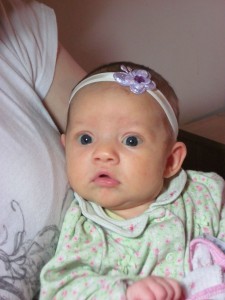 Tonight’s dinosaur themed books was Digging up Dinosaurs by Aliki. A bit over their head but they enjoyed looking at the pictures after I read it and remembered hearing some of the words on their video. 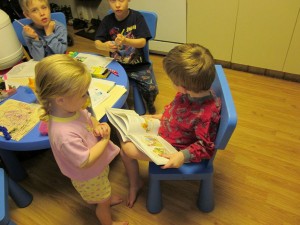 So tonight there is a bit more cleaning to be accomplished, a late dinner to be eaten and some sewing (hopefully) to be started!!! Now if I could just get my laminator… grr on the no van. 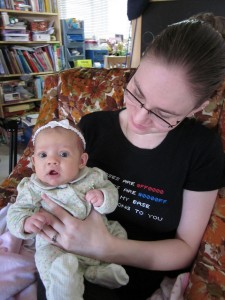 Ok so with the facilitator coming tomorrow I am not in the mood to blog… got some last minute cleaning, organizing and other prep work to deal with so I promise – nice blog entry tomorrow!! 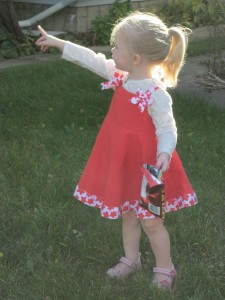 Look for me tomorrow!