And it keeps on snowing! Seriously even the kids are done with the snow, and the cold temperatures that continue to come with it. So I think it will be back the conservatory for the first of our March trips out. After all we DO lose our pass on April the 8th or so. So every week we are going to try and get out to the conservatory or the zoo. 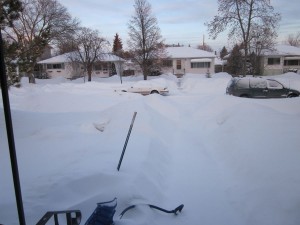 Today was the first day of our Reading Week. We read 3 stories and then did the sheet my sister in law sent me that she does with my nephew Jimmie. 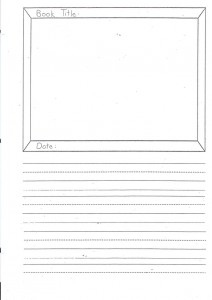 This is what we are working with

The first story was based on a Beatrix Potter one by the same name but simplified. The Tale of Mrs. Tiddlemouse… with Babbitty Bumble the bee and Mr. Jackson the toad. 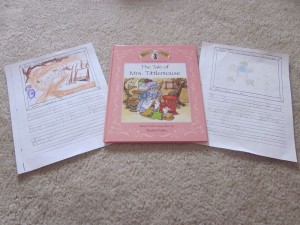 Gavin's page is on left

The second was on the reading list for older children that we got with Echo’s library bag AND a gift a couple years back from the kids’ “in the know Aunty” Karyn… Scaredy Squirrel by Melanie Watt. 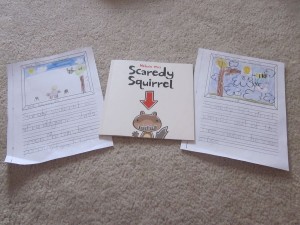 Zander's page is on left

Our third book is a favourite from way back. We had borrowed it from the library and the boys fell so instantly in love that I hunted it down in large boardbook form – Monster Trucks by Mark Todd! It is one of those books they always want a repeat read on! 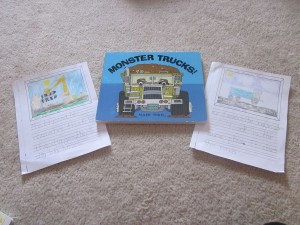 Gavin's page is on the left

Tomorrow I want to include at least ONE book they help ME read. Today, starting out they were less than enthused about the work following the reading of the story so I kept it on an I read to them basis. And then of course the girls wanted one of my favourite baby boardbooks read to them Peepo! (totally recommend this one for the little guys, I love the British war time illustrations) 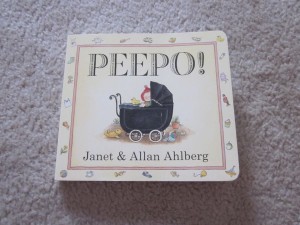 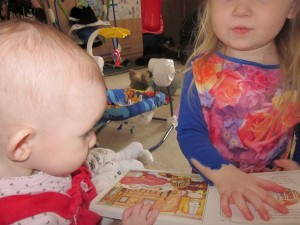 We found a template and instructions for the teddy bear Zander wants to make. You can get it from here. We have the material he picked up at the Reuse Centre but I need to do all the pinning tonight for him to  continue on tomorrow.

Ever since the kids got a Play-Doh boardgame for Christmas from Jon and Yoyo (thanks you two!!) they have been enamoured with the idea of building a game. Well, today Gavin did it. He built his own very simple game board out of Legos and used an 8 sided dice he found somewhere in the house (yes we have all kinds of dice in the house – after all Ken is into boardgames and D&D). Very cool!! 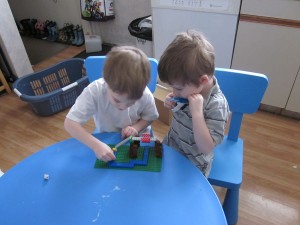 I did up one more bow today… my ribbon supply has been depleted… and one more last night… I am loving being creative with something new and have more combinations to play with. The black and white one was a quick bow done up with left over bits… not perfect but I am very happy with how it will look in Trinity’s hair. 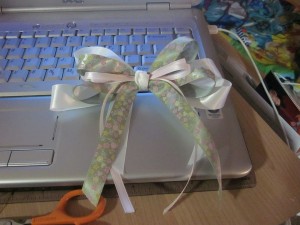 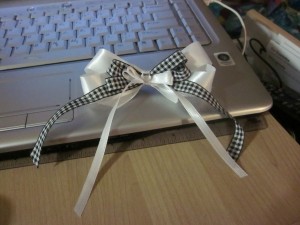 Black and white with a crystal embellishment

Now to get back to work on stitching, crafting and relaxing (and dishes and tidying and of course trying to toss or donate MORE unwanted possessions!)… 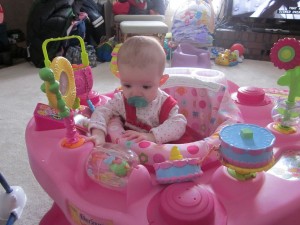 I have to admit Ken’s predisposition to having the most unusual things go awry does add to the excitement in our lives. This time a relatively minor issue, the cell phone. We have, since we got our new phone and number, gotten a number of calls from what seems to be an east Indian individual. Add to that unusual texts in regards to taxis and taxi driver’s union. Bizarre but easily explained by inferring that the previous owner of our number was a taxi driving (in union) immigrant from an east Indian country. The calls have been annoying as we don’t understand them or they us, but this week the frustration level increased. Our phone stopped accepting and sending phone calls early this past week but continued texting. By the end of the week texting stopped also! Ken got a hold of Koodo to try and correct the issue and it turns out the previous owner of the number has tried to reactivate it on their new phone with a different provider! Of course this is all figured out by SATURDAY when the individuals who CAN fix the issue are not in their offices. Leave it to Ken to get a number someone else tried to get back! So here’s hoping Monday we get our phone back in working order. There were VERY apologetic.

Not having a working cell phone did complicate things a little bit last night. Well, most of the day. First off Karyn had to call our house phone to catch us before we headed out on all the errands we had had to postpone over the week to let us know she would not be making it to help babysit. The weather down where she was was at white out levels on a lot of the roads.

We did make it out as a family to get some of our errands done – stopping at the bank (20 min in line! UGH), getting a bought credit card to pay a bill, and the Reuse Centre. FINALLY! I love this place, you can get all sorts of craft supplies and other bits and pieces (this time a couple books came home too!) all for 5.00. 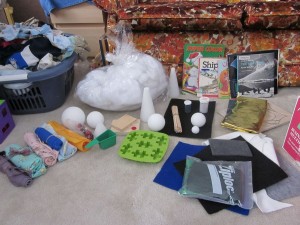 The boys were told to go in with crafts in mind, Gavin did the most extensive thinking out of his project – he wants to make a penguin (we even found a book that included a portion about penguins there). That gave them something constructive to do today. Though only Gavin actually was able to get right to work on his project. Zander wants to make a teddy bear which means I have to find a template online and Emanuel wants something to do with Handy Manny (I have not figured out how we are going to accomplish that). 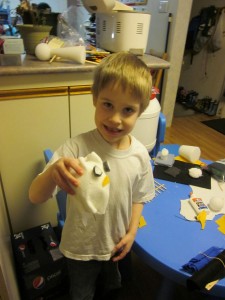 The head on the penguin

Zander did make an ice cream cone out of foam pieces that was quite cute! 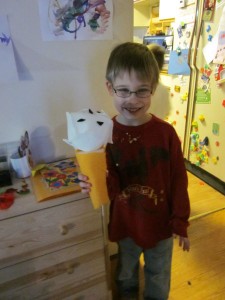 We got the family home and unpacked in time to make up hamburger pie for their (and Sean’s) dinner, change the baby, feed her and get the three of us packed back up. We stopped in at Toys’R’Us for the birthday boy’s (he Chris) gift – a Nerf sword (it went over VERY well of course) and then to Montanas for dinner. He Chris was determined we eat our fill and then some!!! Apparently we amazed the kitchen as well… we started with pretzel appetizers that were sooo yummy, and then a small Caesar salad (each for both) and then some sort of spicy appetizer I tried but was unable to eat much of. The main course was RIBS! I had beef ones with coleslaw and rice… (picture yesterday) 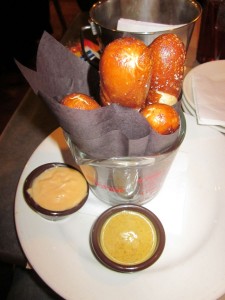 We were there for a nice relaxing meal and Echo even allowed herself to be passed around and cuddled. Of course she got compliments from all sorts of people. 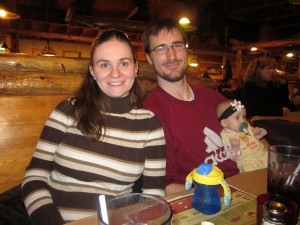 After dinner Chris, Chris and Mae stopped by to pick up some things they had left and had sent to our house before heading home. It was a wonderful evening…

Today we meant to head to the library but woke up to a snowfall and wind, so that has been postponed. 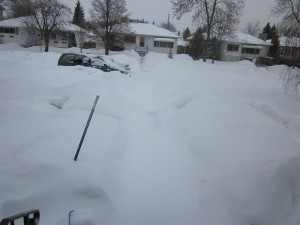 Luckily I have more than enough books for us to get started on tomorrow’s Reading Week. I did, however, get two new bows done for Trinity’s hair. They are called stacked bows and you can find instructions here. I have started to make some tiny bows for Echo as well, though I am still without the needed Velcro. 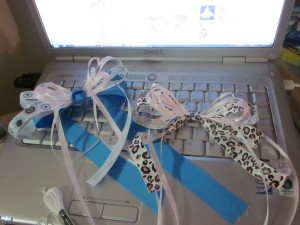 Trinity likes the pink one best

So not the most exciting Sunday but we had some crafty moments and tomorrow I am about ready to start our story time. Just have to print out the sheet my sister in law sent me and pick out which 3 books to start with!! Oh and get back to sorting through everything in the house. Not so much fun, but has to be done! 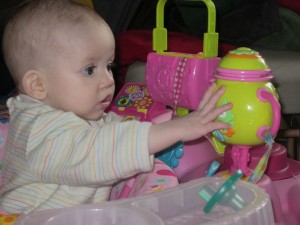 Chris and Chris (and their friend Mae) had us (Ken, Echo and I) out for a delicious dinner at Montanas. So I am honestly too full to blog… I promise on a decent length blog tomorrow!! So check back. 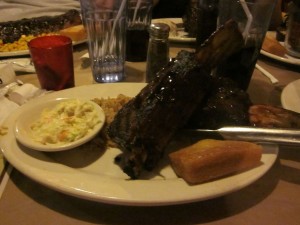