You do NOT want to know how old these resource posts are!! EEP! But we did love every minute of our dino journey. Sadly I was not on the ball and pre-loading a cute kid pic for this one. BUT I hope the info comes in handy!

The “shovel lizard” Lystrosaurus came to our attention strictly by looks! It straddles the reptile and mammal (like) groups with its unusual characteristics. This VERY successful animal was found all over the world. A herbivore, it was found in the early Triassic period with concentration of fossils in Southern Africa, Asia and interestingly enough… Antarctica! The size of a pig, it is stout and short… ran on four legs and quite the comical looking creature. You can also see this dinosaur on the iPad app Fantastic Dinosaurs HD.

Our video is called Walking With Monsters: Clumsy Lystrosaurus posted by Hritzness.

And for our links… for such a prolific dinosaur we really had a limited number!

I may just have watched the movie Home a few too many times (referencing the convenience store scene). Anyway…

This was a pretty big deal – a year after Grandpa Mike’s last visit when he buzzed through on the bike and TWO years since Grandma had visited we welcomed them down for a little over 4 days of fun, sun and conversation. It was a GREAT visit. We had out and about things… at home things… AND they brought us CANADIAN things! Which is always a hoot for the whole family (this fall I totally need to model my brand new windbreaker from the college Ken and I attended – thanks again Mike!!!). 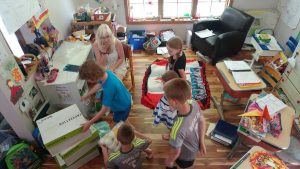 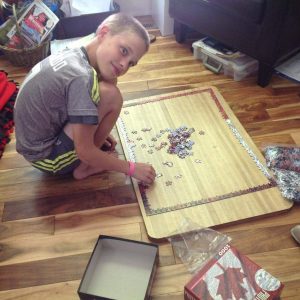 We had to cut out YMCA visits since we decided to focus on family while they were here. We did still manage to go Monday and Tuesday to morning club (and Emanuel to his Young Scientists class) and Zander went to BOTH of his track sessions. After all the THURSDAY was his first MEET! Actually, we left the grandparents in charge that night and headed out just the 3 of us to watch him go. 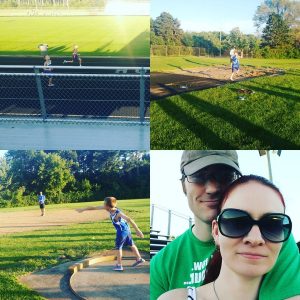 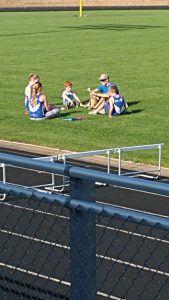 But first things first – Tuesday. As soon as they got here there was a truck to unload. And boy did they pack in the stuff… the biggest surprise for the kids was the dollhouse mom had kept at her house since the boys were wee things. Along with boxes of accessories. So much fun has already been had with the house and will be had for a long time in the future I do believe. 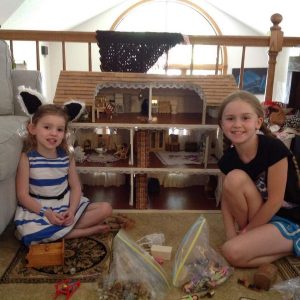 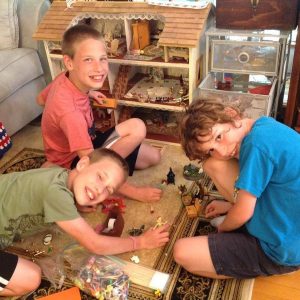 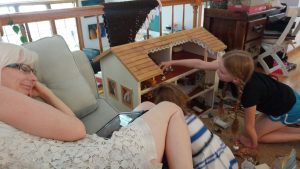 The other hot item was a brand new Monopoly game. Honestly we are cursed when it comes to that game… a board rarely lasts long for one reason or another. This one uses CARDS instead of cash… and the machine makes a very satisfactory series of beeps. 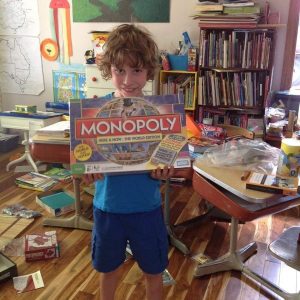 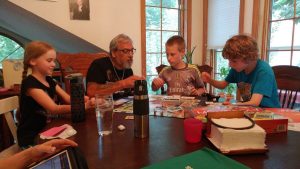 We ate out that night as Ken and Zander had to head off to Track and Field. McDonald’s for the win – a super treat for our family who rarely go out to eat. 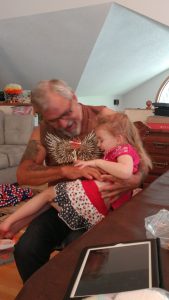 Wednesday we had to do our yearly testing for school. So we had an at home hang out and catch up day followed up with an evening visit to our very favourite beach!!! 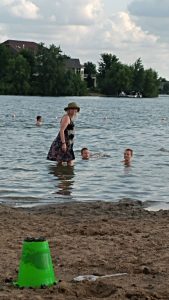 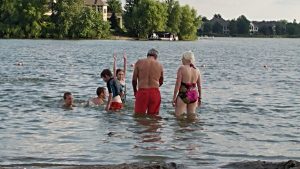 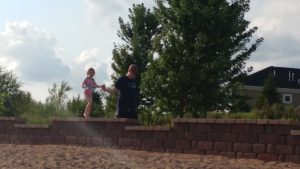 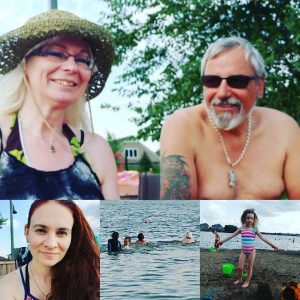 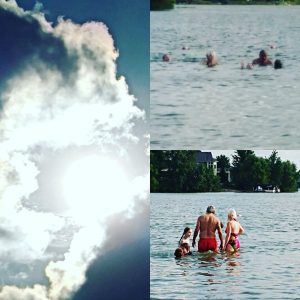 Thursday I booted the family out to the Como Zoo while I hung out, cleaned, crafted and generally did things one does at home without kids while they slowly went stir crazy! I am told great amounts of fun were had by all! 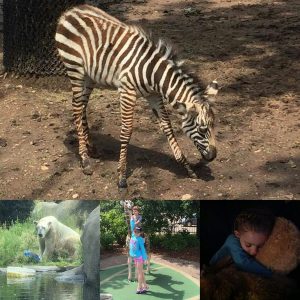 Friday was one last at home day with a lovely walk to the park for a nice visit full of sunshine and playing. 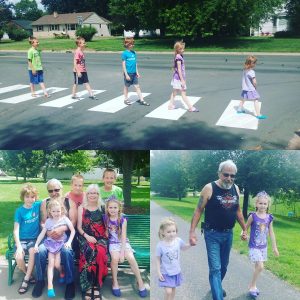 So we had an amazing balance of out and about with home and comfortable. There was laughter and catching up and hugs and GRANDMA HAIR! 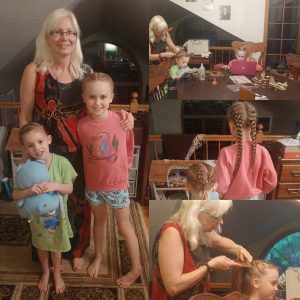 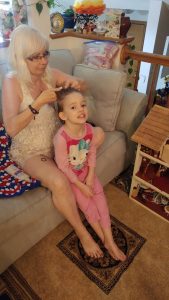 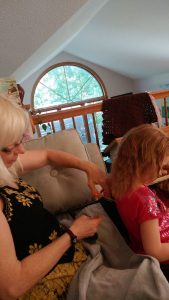 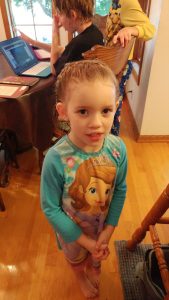 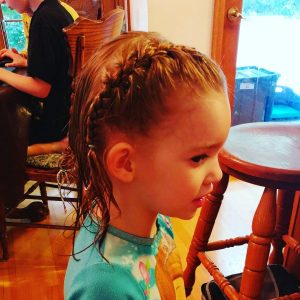 I know we talked about this visit for a while after with great fondness already. I am so glad we were able to show Grandma and Grandpa Mike around out little neck of the woods some and share with them some of our favourite places. Definitely a visit full of memories. 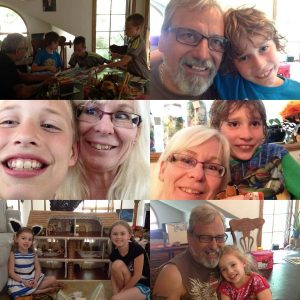 As always I am writing purely from my personal experience… but the first thing we did when Ken realized he was returning to suicidal thoughts and deep clinical and chemical depression was to “circle the wagons”… I am not sure if everyone is familiar with this saying so I will of course link a definition Circle the Wagons. Wiktionary seems to have a pretty clear definition.

Anyway, by circle the wagons I mean we really did stop the world and focus inward. This was crucial as we were literally working to ensure that Ken was out of danger from himself, his thoughts and any urges that he could have in the future. I am very grateful to my in-laws as they were in the thick if it right away due to proximity.

We had to reassess how we dealt with the public as a whole. How to do you hold a lighthearted conversation with a near stranger, close friend, acquaintance when your entire being is focused on the well being of one person? With the additional complication of not releasing to the greater world how bad and how dire things had gotten? This was not like he was diagnosed with cancer and now we were having a public battle with a disease. In order to get Ken the help he needed at the speed and comfort level he required we had to close our mouths and sometimes the door to those outside our immediate circle.

Really it became second nature for a while. We needed to deal with medication levels, government programs, therapy and psychiatry appointments. We had to familiarize 5 children with the situation in a way that they could comprehend and in a way that did not pressure them to take on any miss placed guilt, confusion or fear. It was a battle we had to fight quickly and quietly at first. There was no way that at that point in our journey to a healthy and sustainable lifestyle that I could blog like this, share like this. And boy did I want to.

Circling the wagons can be something that is comforting. We are home, safe and sound, no pressure from the outside… no people saying – but you don’t LOOK sick… or you can’t be THAT ill or I would have known (how would you have known when HE didn’t know? when his own wife didn’t know as she slept next to him night after night?)… no unanswerable questions, no slipping out of privileged information.

So we cut back on out meet and greets, worked out workable dialogues and explanations and focused our energy on what was crucial – reintegration of Ken into our family in a healthy manner AND a focus on getting Ken started on a path that was not self destructive and frightening.

Circling the wagons was swift and easy really, it is the “un” circling that has been the trick. Our reintegration into society (as trite as that sounds) was slow and painstaking. We had to push out of that comfort zone and remember that it is ok to share. My first job was to figure out the limit to what information we were willing to share. Did we want people to know how sick he had been? Do we let in the world on our process? Do we meet new people and just act like all is well?

Well the answer is … you try. And it was scary and hard and at times felt impossible. Having to explain that we couldn’t just get together because Ken had multiple appointments. That we have to cut back on everything because he is on medical leave and we simply do not have resources. That his health was so bad due to depression induced neglect that yes he needs naps and rest right now. These all were things we had to face, extend out and realize that maybe, just maybe everyone else would understand just a little. And if they didn’t – well maybe their place wasn’t in that part of our journey quite yet.

Meeting new people (something which I was very fearful about initially) has taken on a pattern. Depending on the venue I am very up front with Ken’s hearing issue. There is no point in beating around the bush – the man can’t process what you are saying if it is too noisy. He isn’t ignoring you he is… Ken. And that is ok. No one has laughed, no one has seemed upset or disbelieving. In fact, people are interested in knowing more!

I have become quick to mention, when someone asks WHY we have stayed where we are in the state, that mental health resources in Anoka county are AMAZING (cuz they ARE) and that Ken has depression so we stay where we can get resources to ensure he is healthy. You know what? No one has seemed all too disbelieving or unreasonable about that either!!!

BUT it is hard. There are days when I am peopled out… I carry the brunt of interaction in public due to Ken’s hearing issue AND being the buffer when he hits threshold, then add in 5 active children and my own shyness. Because even if I can type up a storm and in my own house be a chatty Kathy, throw me in a new situation in an unfamiliar location and BANG I really do want to sit back, crochet, and take it all in.

There are days when I worry the kids will say something that will come across wrong (of course I think many parents worry about that who are not dealing with an illness or something that they wish to divulge in their own limited fashion… kids are just too darn honest). That I will be shown up as a bad mom, a difficult wife, a lacking in something person. Insecurities run abundant when you are dealing with something so life changing and dependent on you playing your part.

SO what can be done? Well… for myself I find that my internal dialogue has to change. Ken’s illness is a starting point for a new life for us. One full of healthy walks, therapeutic talks, and a family that is now stronger than it has ever been. I have to release the fear that the kids will over share. They are kids and everyone knows that. I am not the only one with 12 yr olds who think they are grown adults, I may be in the minority with FIVE minions, but that is ok.

I am constantly seeking a balance, socializing with the necessary privacy, sharing with a reasonable stopping point, newness with a touch of familiarity. And it is all good. There may be people who cannot understand our family, but somehow I think that is more homeschooling/large family/random Canadian weirdness than Ken and his illness. Besides, how can I truly be an advocate for mental illness support if I don’t step out there, loosen up our wagons and let the reality go free? The grass may not be greener on my side but it certainly is wild and interesting.

As always, for those who are fighting their way through it… be aware, if you lock down some day do open back up. We are here waiting for you when you do. And those in support… remember, being let into that circle of support is such a gift. It is proof that you are an amazing person who is a positive impact on their health and their future. GO YOU!!! And anytime anyone needs a shoulder.. well we are here!

Once again. If you are interested in any of my depression and my family series do use my search engine. The term depression should bring up most. I hope to set up a better link series in the near future. And if you have an idea or topic to share. I would love that! 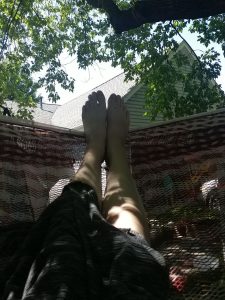