Another book another review. This first in a planned series by Anna Elliot is a terrific paranormal series. Aisling is a demon hunting mother of a 9 month old baby whose baby daddy is a Knight of the Templar (talk about a major complication and a big time no no) who works for a water elemental with an office full of characters.

You follow Ainsling as she deals with avoiding her ex, fighting demons, raising her daughter… oh and stopping the fall of the veil and the end of life as she knows it! You begin delving into her past, realize her future is uncertain and her love life a mess… or non-existent, depends on how you look at it.

I absolutely loved this story, the characters and the fast paced action… enter into a world where demons exist, Templar’s have power and hunters work hard for their living. Ainsling is a mother after my own heart – ready to give her all and dedicate herself to her child she is absolutely certain that the best thing that ever happened to her (regardless of the unplanned circumstances) is her darling baby Willow. I am absolutely going to hunt down the second in the series when it is released!!! Be sure to check out Demon Hunter and Babyand add some paranormal mystery in your life. 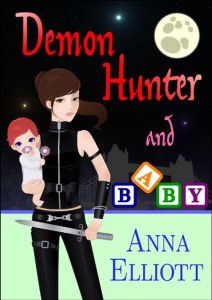 Wednesday was the day of the great pumpkin hunt. We started off with a group photo of the hunters… note the sweaters, fall is here and in the morning the weather is rather cool! 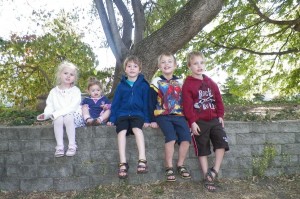 Dressed and ready to start the great hunt

What a great morning of schooling, we had to get to the grocery store, figure out where the produce was, check out the apples and note the varieties (plenty but not cheap enough to do a big pick up) and then head over to the pumpkin/squash display. There was a nice selection including something called a buttercup squash that had Gavin coming up with a bunch of silly reasons as to why it was named that. My favourite was that after you empty it out it would make a perfect cup to drink juice out of! They had a great price on the pie pumpkins – 2 for 4.00. So we picked the nicest two, did the rest of our minor shopping and headed back to the house. 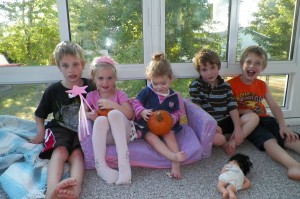 There was a bit of a detour though, with birthday money from other sources Miss Echo finally got her Coup car! This is a favourite toy for her when she visited around but she had never had a chance to play in one in great condition. This brand spanking new model was a dream come true! It took Daddy AND Baba to put it together while the others did their book work. Though she made sure to get involved as well. 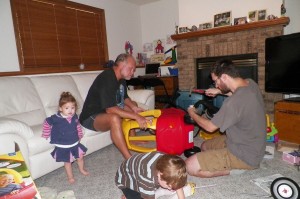 With Baba and Daddy 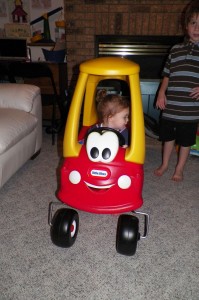 In fact, after the kids finished their book work they went right in to the sun room to create some absolutely amazing Lego creations!! Gavin made the zoo animals to share and each of the kids had a piece on the table. I love it when they go out of their way to add to a series of pieces that we can then share with everyone. 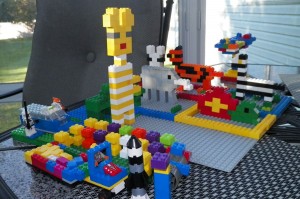 I have found and joined the email alert for an absolutely AMAZING art for kids site. This is DEFINITELY going on my active links list for homeschooling. We started simple with the pumpkin print out – rather appropriate with our upcoming fall/Halloween season. I gave the sheet to Gavin and a piece of white paper and let him go with it. The steps were absolutely clear and he had a blast creating pumpkins. 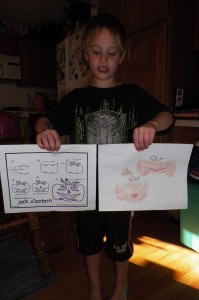 Gavin with his Jack-o-lanterns

Of course we had to go BACK to the site and get MORE print outs… so we basically printed out all of the ones that the site had in pdf form and Gavin sat down and drew. I think he said his favourite was the ninja! 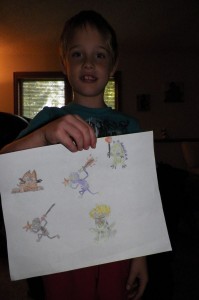 Finally on Friday we ended up with the videos that had more steps and no printouts to follow. I set him up on the computer with a walkthrough on how to pause and rewind the videos and away he went. I was especially impressed by his dinosaur! I cannot wait until they add more!!! 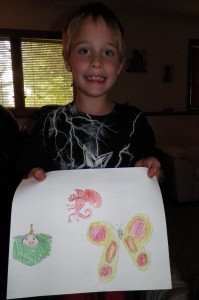 So the proud artist!

But back to our time line… where was I… oh yes, Thursday. Well, Wednesday night Nana and Baba were out with the cousins and Ken the gaming with the guys so it was rather quiet here (did I mention EARLY BEDTIME???). But on Thursday we had a relatively sunny day and a Baba intent on backyard activity. There is still stumps to remove in the backyard. So I let the kids run in the morning. Before anyone could get out to cut down the stumps the kids put in a couple hours creating this amazing bridge/ramp for Ken’s remote control car to bridge the hole left by the tree removal. It was a tight squeeze but they actually made it work! 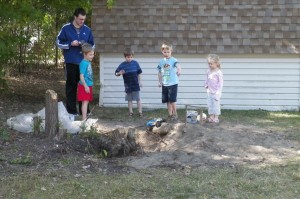 And then it was time for the guys and the chainsaw (new acquisition) and all that fun stuff. The kids were a little put out as I would not let them drive the car around while the guys were using power tools but it was interesting all the same. Echo did NOT like the noise the chainsaw made AT ALL. 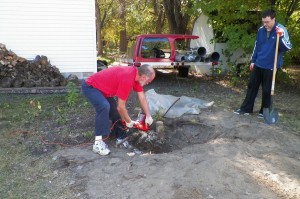 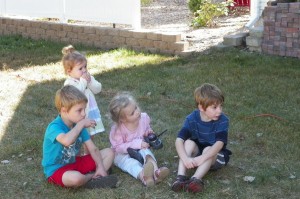 We got a package in the mail that matched an envelope we had received previously! Did I mention, Gammie sent the kids some cash to buy something small and save a little? The boys all decided to save theirs for bigger things but thanks to Target Trinity was able to deck herself out in princess style. 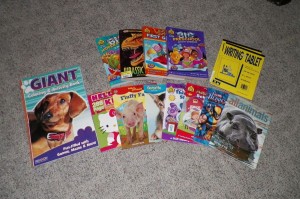 Anyway… apparently Gammie was bored and came across some neat stuff to send us – workbooks, colouring books, a shirt for yours truly… and more letters!! We have had some slow responses but it has been great starting our pen pal program. If anyone is interested in adding themselves to our list feel free to contact me! 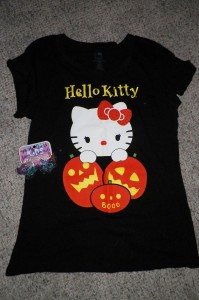 look a kitty shirt for ME

After all their book work was done the kids went BACK into the backyard (Baba had a nap so it was free and clear) and made ANOTHER amazing structure. What these kids do with sticks and dirt… I love the teamwork and the ability to consider different mediums to create something new. And they are so proud of it when they are finished! As are we of course. 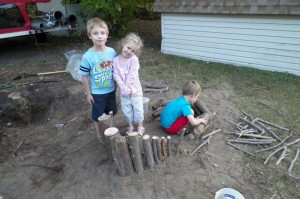 Back in the backyard

Now Friday was a bit busier. Nana and Baba had to pack up to spend their weekend camping with the cousins and we had to get everyone dressed and motivated to do a round of shopping. There was food items for the great pumpkin pie creation, a coupon to use at Victoria’s Secret… 10.00 off a 12.00 lotion that glitters!!! 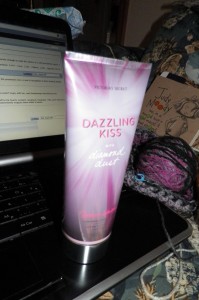 A check in at Burlington to see what their coat prices are like (coats and snow pants.. maybe we can get away with all 4 of the bigger kids at 120.00… Echo would go baby and used)… and then home again. Oh don’t forget Michaels! I got a bitty globe for 50 cents and some Hello Kitty stocking stuffers for 25 cents a piece when they are usually like 3.00!!! 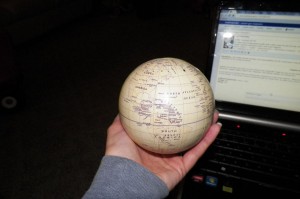 Get everyone home, get the book work done and then disperse the kids to naps and quiet occupation… Zander and Gavin did their pen pal responses and then puttered around. I am trying to get them to realize that they have things at hand that can be fun, at least the new colouring books are sparking interest. 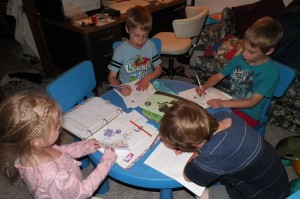 Of course we started with the scraping out and then baking of our pie pumpkins. That was about as far as we got, but the boys got their hands dirty and we have pie pumpkin seeds to plant next year! We will continue the pie making later but I have a neat idea (if we can work it out) of how to save the shell of the pumpkin! You can find the instructions we use HERE. 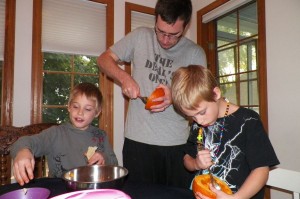 We also did a random act of kindness and sent off rainbows to a sick little girl in Saskatchewan who wants a rainbow from everyone all over the world. The kids were quite detailed and we included their name, age and Minnesota, USA on them. I hope they help bring a smile to her face! 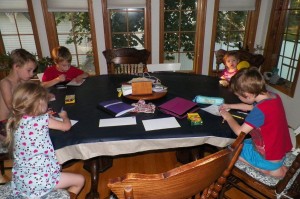 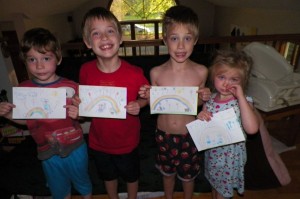 With a weekend of pie making, Novak visiting and family together time to look forward  to I am so glad that Ken is willing to be hands on and present right now! 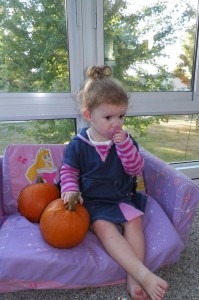 With the original series we ordered for Emanuel for the next two years in back order we have had to fall back to an old favourite to fill his time with learning and fun… I am sure many of you who know Emanuel would realize what that is – DINOSAURS! We went online and looked around and let him choose the dinosaur he liked the look of. First on the list was a tricky one to say –  coelophysis pronounced see-LOH-phiss-iss. This little carnivore is thought to be a rather nasty critter – not only was it a meat eater but it is generally thought that it also ate its OWN young! Add to that the fact that it ate living or dead animals and was one of the oldest dinos and you have a rather nasty little critter. Emanuel loved it.

A friend on Facebook did some searching for me and here is what she found… First off TWO videos on YouTube… check them out, they are both brief.


A great resource that you can sign up for for free and where we found our short list to choose from is LearningPage.com. I will most likely be adding them as a permanent link on this site. They had some interesting resources. EnchantedLearning is always a great resource. Luckily this gem was not one of the pay fors as we do not have our subscriptions back yet. Check it out HERE. I need to check out this Kidsdigdinos.com site a little more but the blurb on our dino of choice was rather helpful! You can find that link HERE. I did my own google search and found THIS colouring page site. You can never have too many colouring pages!

Emanuel really enjoyed his foray into dinosaur learning so we asked him to pick ANOTHER dinosaur… the next one – Nodosaurus! I will post links etc for that one too of course! Please send any info you have on dinos that would be fun for our little ones my way!! 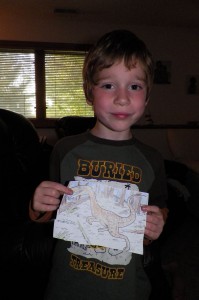