Well, I am back to the land of the living… mostly. After a day of sleeping broken up b breastfeeding and a hacking cough it has been nice to see some sunshine. It seems to be a rule of thumb that Mommy is ALWAYS the last to get sick. Which means the boys are all on their way back to healthy again and VERY unimpressed that I am sick and unable to do things with them. For those of you who know me well – I was sick enough yesterday that I did NOT take any pictures!! Period.. total.. NONE! I am very thankful that today I am feeling more myself, though this hacking cough is so annoying.

In fact, my getting sick proved something to me – we HAVE TO be doing something RIGHT with the boys. Last night when I was vertical enough to have something to eat and feed the baby Zander came up to me complaining because I hadn’t done any schoolwork with him. There is a testament to our homeschooling program working – he was upset about missing time learning. It makes me feel really good that he was upset about our taking a day off… in fact every time I have offered to take a full day off and just have play time they have BOTH said NO. Here’s hoping that voracious wish to continue learning is maintained through out the rest of their lives. Gavin had a pretty nasty meltdown this afternoon so was sent for a needed nap so Zander and busted out a review book (he likes to alternate the harder books with a good review which is fine with me) and we spent a quiet afternoon working on our ABC’s. 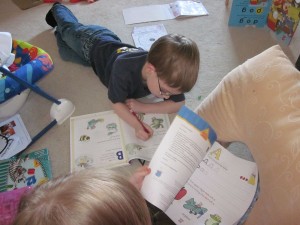 I made another birthday card last night. Another Hello Kitty of course (and don’t worry James – if you or Holly are reading this – it is not going to be sent to you as a belated!). I have one more birthday girl in June to make a card for but am torn as to whether or not to take advantage of Karyn’s Cricut and make it with that. After all I have to give it back soon. 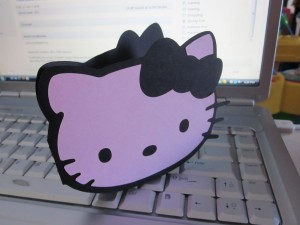 We were talking to the owners of the home we are currently in via email last night and it seems that we may have until June 1st to find a suitable place. I am still pushing (as is Ken) to find something by May 1st though. We are ready to move – after all over half the house IS already packed. Poor Trinity and Emanuel are slowly being squeezed out of their rooms by boxes but I do NOT want cardboard boxes stored in the basement with all this lovely weather we are finally having. So much snow yet to melt though! 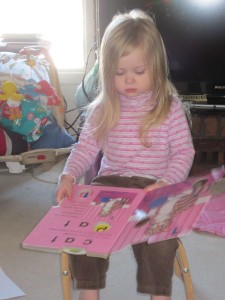 Stories in the sunshine

I am very glad that I managed to finish the stitch for my sister before I got sick, though this means tonight I have to write the letter for the two of them out in its entirety. I am determined it will go out to the post tomorrow. I will share the finished image AFTER their wedding on the 21st of May. That means I have to move onto the next project – a Christmas Stocking for our god-daughter Anna. I want to include her English AND Chinese names somehow, and make it something a little unique. Thankfully I still have some time. But I am itching to get onto a new stitch project after working on this one.

The rest of my evening is going to be centred on relaxing. It is amazing how a harsh cough can be worse than everything else combined!!! Then back on track next week, or so we hope. OH two days ago after much tears and angry crying Echo FINALLY rolled from back to front, now she is a total monkey rocking back and forth, but only when angry or being changed! Figures. 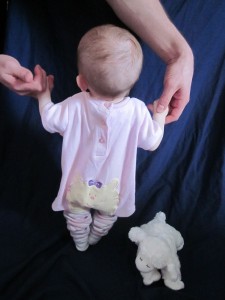 The Authoress is sick today, I will let her back on the internet to post her newest post AFTER she stops doing her impersonation of a space heater! (No picture today, we are all looking a little worse for wear.)

The weather is creeping to above zero BUT the kids are experiencing varying levels of sickness. The worst this time round is surprisingly Trinity who spent most of her night last night on the couch with a sippy of water and Kai Lan on the tv. She couldn’t lay flat as as soon as she did she would start to wheeze. Poor girl, lots of hot baths with vapour bath in it and time with Mommy and Daddy. 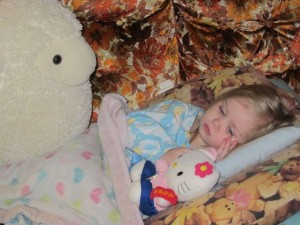 Watching Kai Lan under the watchful eye of Fat Sheep

The other three have faired much better. Emanuel was absolutely exhausted at my mom’s on Sunday and now seems back to normal. Gavin has a lingering cough (which is a norm for him  for some bizarre reason) and Zander felt a little ill by Sunday evening but was fine the next day. Thankfully Ken and myself are both feeling relatively ok and Echo is just a little fussy (ok that is the most frustrating of all almost but still). 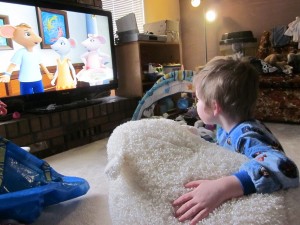 We spent some time on Spring themed worksheets. A little frustrating as everyone is a little sick of being in the house and dealing with being quiet so the ones napping can nap. At least we are getting some sunlight in the house and they are spending some time working TOGETHER on a few of their more difficult math sheets. You can certainly tell they are getting over illness – the whining, arguing and stubborn behaviour is drastically increased. 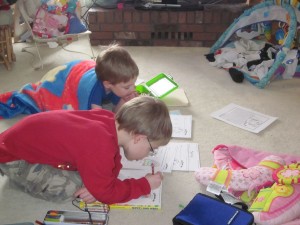 For some reason lately they just want to work on the floor... maybe it is because the best windows in the house are in the living room!

Thankfully ONE of our kids was in a marvellous mood for a nice portion of the afternoon, surprisingly it was ECHO! So Echo, Fat Sheep and Petite Sheepette had a bit of a photo shoot. 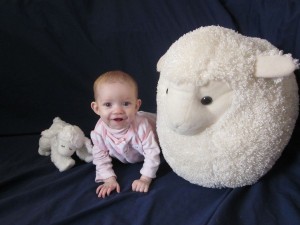 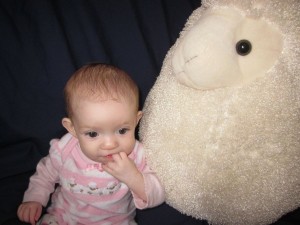 And then she spent some time in her sit and play. I couldn’t resist a little video. I may share that another day.

It was early to bed for the kids with our trip to the den Otter’s for a playdate cancelled and Mommy and Daddy’s patience at an end. BUT tomorrow I hope to have the kids more motivated and at least in a better mood. Ken is hoping to get out to the bottle depot around work and other chores so that we are squared away to go to The Mall on Friday. There are Fat Sheep pictures to take, shirts for the girls to purchase and we definitely need to look into new jeans for Ken!!

There is a bit of a story to that, back on Friday night Ken and Ted had to head out to Karyn’s car (in the dark) to take out all the boxes she collected at work for us (she has a hatchback so there were TONS). On one of the multiple trips out to the car Ken and Ted came across two little girls walking dogs on leashes. They stood off to the side and Ken said “hi doggies” whereupon the little one of the two growled and jumped at him. Ken tried to jump back but it still tore  through his jeans and just caught his skin!! ACK apparently the dog has only recently become a bit viscous… only since they got the other bigger dog! Which makes two little girls walking them at night alone seem a little… wrong. Well after they got all the boxes in Ken disinfected his shin and we took in the damage… the jeans are kaput (they were wearing out anyway) and Ken is reduced to wearing khakis. Poor man (should I tell him I think he looks cute in them? Cuz he does!). So yup – even simple things like getting boxes out of a car can get exciting around here!

Oh – if you are interested in another viewpoint of today’s sick day you can read Fat Sheep’s version HERE. She was a great help on a sad kid day!

The rest of my evening is pretty well booked – I HAVE TO get this cross stitch done TONIGHT. I have plans for the last two days of the month to ensure my gift to my sister and her husband to be gets out ON TIME! So time to get busy. 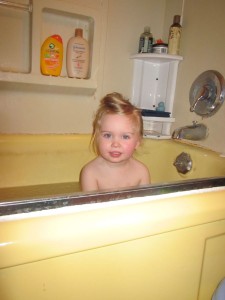 Trinity's Hang Out over the past two days!