The 4th day of a 4 day weekend feels very surreal to me. I felt absolutely LAZY and it was ever so slightly driving me crazy. Ken and his dad spent a large chunk of the day rearranging the garage so that one of the cars could fit in it. Which also had us drag out and sort  through the Christmas items. I am only using our Advent items and Christmas stockings. It is simply not worth having out our decorations this year only to have to sort them back out when we put everything away. It is an odd feeling, this is the first time since I was 19 that I will NOT have my own tree…

BUT We DO have our Little People Nativity set to have out for entertainment and decoration. Of course Baby Jesus is waiting for Christmas Day hidden away. 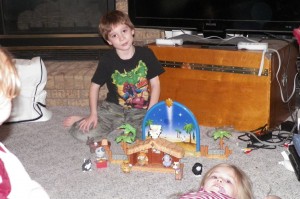 Emanuel with part of the “Jesus town” as they call it 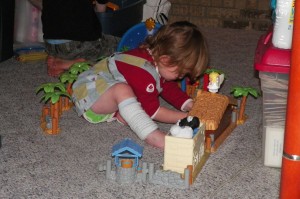 The kids are STILL over the moon with the new snow. I am wondering how long it will last but definitely glad they are still jumping to play out there together. 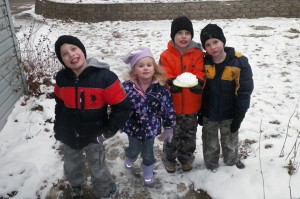 Out in the sunshine!

In fact, this upcoming week is set aside to finish as much unfinished items going for the kids as possible and get our Christmas and Advent themed learning organized and ready. There are presents to make, Advent calendars to set up and of course songs to learn for our mini concert that we will post up on YouTube.

Monday ended our 4 day weekend and started our Thanksgiving etc wrap up. We also had a START up… Gavin decided he wanted to make his godmommy back in Canada a book… so paper was cute and ideas discussed and he was off! I gave him the 5 days of the week to work on it so that after the weekend a cover could be made and then the entire thing shipped off. 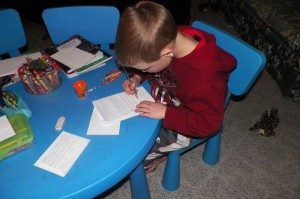 Miss Echo has become an iPad pro. Just don’t take it away from her! EVER! 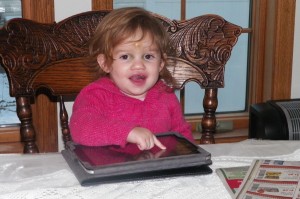 She loves her electronics

We did our last fall themed drawings from Art for Kids. SCARECROWS! I am saving all of these instructions and making them into a binder, they are the best I have seen around! 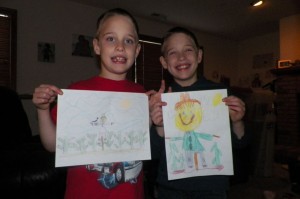 Don’t forget our 5/5 with Gavin and his spelling! Zander didn’t disappoint with only 2 wrong when he did his test as well. 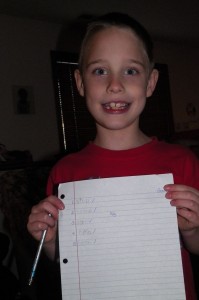 We have given up dinosaurs for the week, just need to get as much done as quickly as possible with a BIG surprise for the kids on Wednesday. 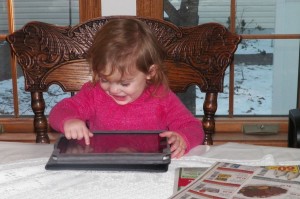 So sweet and without the war wound look :)

Just a filler tonight, time to deal with Advent prep!!! 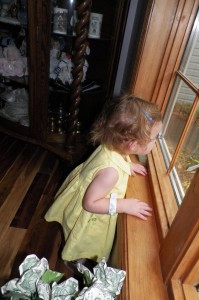 Watching the world go by 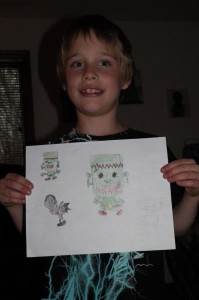 Gavin and some of his Art for Kids inspired drawings! 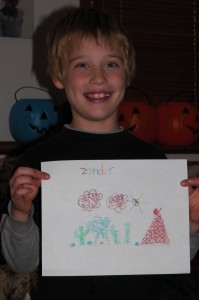 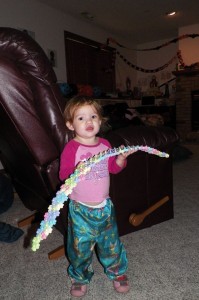 Can you believe she built that herself??? Thanks again Michaella for the special puzzle shaped blocks… they are an absolute favourite! 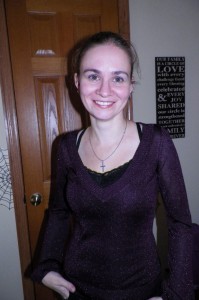 Me, myself and I at my nephew Zachary’s birthday party 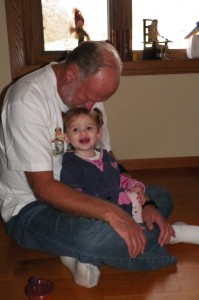 Baba and Echo at the same party 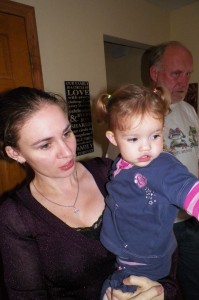 Just me and my baby enjoying the party 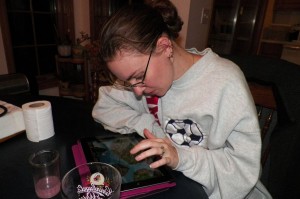 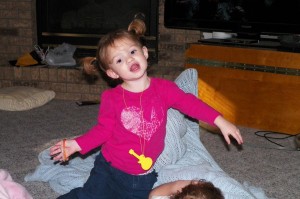 I don’t normally allow a true four day weekend but with this being the first weekend with Nana and Baba back from Tulum it seemed like the best thing to do. Of course that does not mean we DID much. In fact, Friday was definitely a sit about and relax kind of day. It was at MIDNIGHT Thursday that Ken and I did one more rather “American” thing. We went out for my very first Black Friday.

Apparently it is not the same as it used to be as some stores opened as early as 8 pm on Thanksgiving day, but we decided to wait til midnight with the hopes that the lines would be shorter as well! We only went to two stores – Walmart (crazy lines!!! Lost a mitten… so sad as it is one of my Canadian ones from the Bay from last year, but we will be going back to Walmart to check the lost and found) and Target (the exact opposite, quiet and no lines, and I bought a pair of stretchy gloves for 3.00 to replace the mitten at least temporarily). OH and Starbucks IN Target… I got a Christmas themed coffee for the fun of it, total yum and NOT cheap!

We didn’t buy much but could not resist the pj’s at 4.00 a piece (I really should have bought double sets)… I did finally find out the reason it is called BLACK Friday though… It is because the day after Thanksgiving is seen to be a good shopping day, the day that stores move from being in the red to in the black due to large sales! Interesting but boring reason. So we drove around a bit and saw the crowds and determined that the big thing we needed to get was better purchased ONLINE! BUT now I can say I braved the crowds! And as I promised myself, only bought the things we needed from a select list,  not just sales for sales sake. 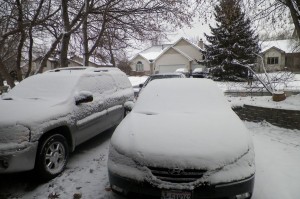 It snowed that night!

Anyway, after returning victorious (we also managed to get a copy of Brave for Nana and Baba at the 10.00 sale price) we had some cleaning up to do, and then bedtime. Friday morning we… well we sat around, the kids played computer type stuff and the adults rested. We really did NOT want to go out on Black Friday and face the craziness. Some places had time sensitive sales but really we didn’t NEED anything badly enough to head out. Family together time was a MUCH better choice. 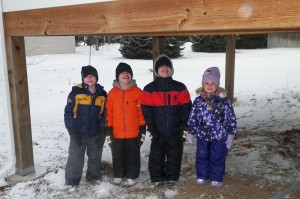 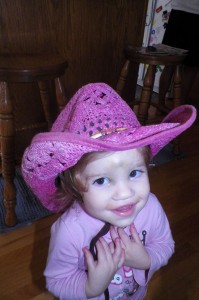 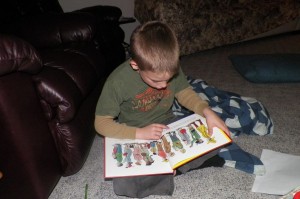 Zander with his reading. They are REALLY improving!

Of course SATURDAY was slightly different. That evening Ken and I went out to Bath and Body works to take advantage of a limited time sale AND the fact that here in the US we can stack coupons. Add to that an American Express gift card I won online and we spent a grand total of 71cents and got almost a hundred dollars worth of items! That included a FREE candle! (I am sure you can imagine how happy the family pyro is with his TWO Christmas scented candles) We had actually planned on going out to get boots for the boys but when we stopped at a gas station to fill up a tire Ken ended up accidentally deflating it and slowed us down to the point where it was just best to head home and plan for another day. 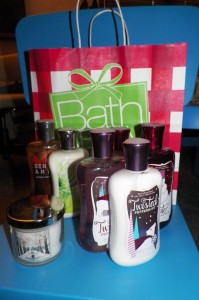 Instead the boys played Minecraft and they all played games. That freed me up to sew to my heart’s content (though did mean we did not make it to get the yarn I am missing for some Christmas presents). I am done all the hats for all of the kids, and now am moving onto the other people in our life… lots of light bulbs and various ideas are coming to mind so hopefully I can manage to continue at a fair pace without wearing out my hands. 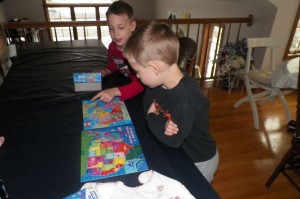 It is definitely winter here, though nowhere near as nasty as we are used to for November. The snow is sticking and the weather more overcast BUT it is still lovely! No -30 Celsius yet! 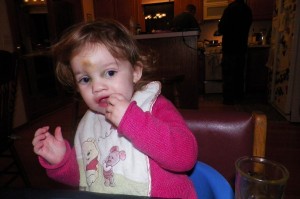 Poor Echo, her face looks worse before it looks better!