Summer is here! And… well rain and wind and storms on the way. In fact, not only in Minnesota but devastatingly so in Alberta specifically Calgary, High River and portions of Southern Alberta. We lucked out with the weather never really hitting here but Joe and Faithe had downed branches and worse on their street as well as multiple days of no power. Bree had some of the same in the city as well! I know that that is done and gone (since this is a delayed post) but the clean up in both areas remains. It is hard to see what all happened around my friends and family up north and not be able to be there with them. Thankfully our friends and family on both sides of the border made it through fine.

Nana and Baba left for their weekend camping trip after collecting the cousins on their way out. Of course that made our day start… well exactly the same – schoolwork in the sunroom… 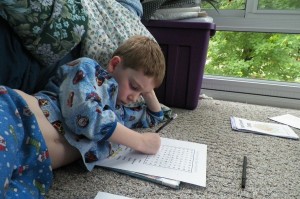 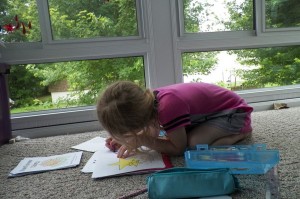 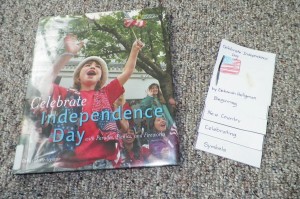 After we continued with our Independence Day learning Emanuel was ready to get back to his dig. He is loving the process, as slow as it may be, AND the chance to boss around his helpers. He is quite generous with both compliments AND tool sharing for the most part. 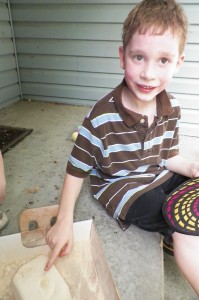 Nana and Baba had bought a large watermelon before they left so of course we had to cut it up and chow down! This was the best one to date. 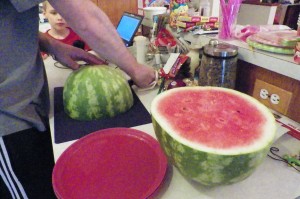 The weather on Saturday was less than beautiful with lots of rain. So out came the rainboots! Photo op! 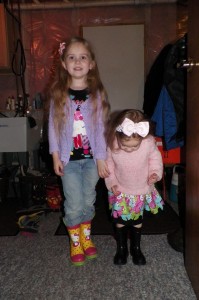 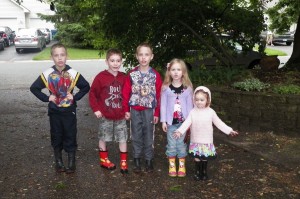 Ok, so the boys were less than enthused about standing in the drizzly rain.

On our outing to do some shopping we ALSO stopped at a couple garage sales. For 3.00 I got a boat load of dolly things… Groovy Girls in fact. What a deal! And two happy girls to boot. 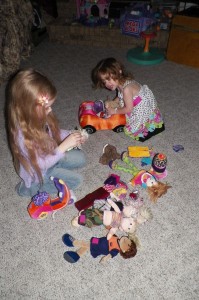 The kids behaved in vehicles for the last week+ so they earned their bubble machine. We found out that it requires the Gazillion brand bubbles so there is some more bubble shopping to do but the first round was AMAZING. Other bubble brands just don’t compare with the dripping technique and the speed of the air going through. 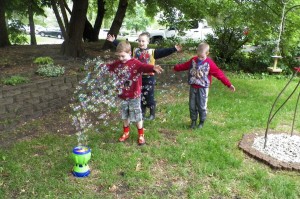 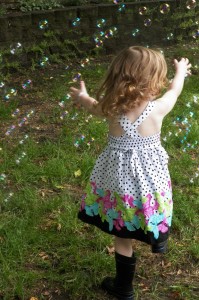 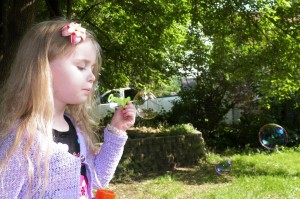 Ken and I worked on the last of the cataloguing of the wood for the playset… best we could do while the weather was so ick. 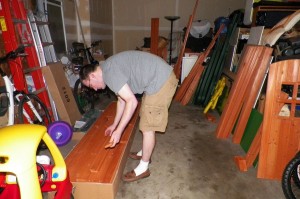 3 boxes to go through total 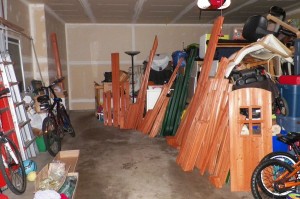 Though once the sun came out out went the kids. The weather was so horrible that Nana and Baba returned with the cousins in tow. The water level was too high near the campsite and with Joe and Faithe still home watching for power and downed branches it was not worth staying. 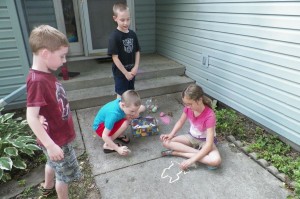 So the solution… freezies! 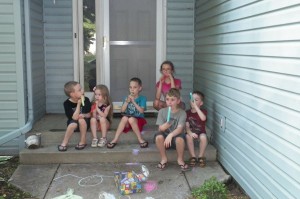 Weather did not cooperate but we found fun anyway. And the kids got bonus time with their cousins before Nana and Baba left for Mexico! 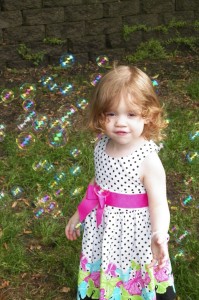 I totally did NOT realize that I had not posted a blog entry last night until well after I had gone to bed. It has been quite the weekend. My birthday is on Monday so I did attempt some pre birthday fun (attempt as weather interacted negatively to either cancel or alter plans) but even more so… I am sure that most of my readers are aware that I am originally from Canada, Alberta in fact… this has been a rough weekend for Southern Alberta. My brother James and his family (Holly and Jimmie) live in Calgary as do many of my Reinsch family relatives. Thankfully all in the higher portions of the city. Likewise my friends Esther, Kathy, Bianca… all safe and relatively dry. Starting late Thursday a flash flood warning went out for Calgary and area… It was much more extreme than expected (rain on the mountains facilitating melt). The city of High River is basically underwater as is Black Diamond I am told. Other towns have also been affected.

Calgary has been hit hard. Downtown (which is where my brother works) is shut down, underwater and without power… Stampede grounds (Stampede is in 2 weeks) are also underwater… the zoo is looking at 2 weeks closure to fix the mess they are faced with, though there have been no animal losses. There has been 3 confirmed losses of life, thankfully there was some signs so people were able to start evacuating in time. BUT there is always the chance of a surge of water or a dam giving up. Add to that Medicine Hat (where my Aunty Becky and Uncle Lyle live) going under flood warning and it has been a round time all round in southern Alberta.

It is very surreal to see locations we had previously considered renting in (before the big move here) now underwater… to realize that that could have been us! Not only do I feel very grateful that my family are safe, friends sound but I am equally aware that we really are where we need to be here in Minnesota. Although we too were under a flash flood and storm warning Friday night… my brother in law Joe and his family have downed branches and their neighbourhood has seen worse. Power has been off for AGES!

If you are able to help HERE is a list of drop offs and ways to financially donate to help all the different people (and animals) who are in need after the flooding… Thanks to Huffington Post. Life is not going to go back to normal in these areas any time soon… again I am just thankful that for the most part everyone is ok… and saying a prayer that this is the end of the flooding and wonky weather! 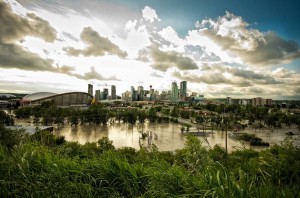 Picture thanks to Roman Sotelo (HERE is his Facebook page)

Definitely less stressful, tiring and frustrating taking the drive through text message updates. We went to bed with the menfolk in Montana and proceeded until a little after lunch with them at the border. We are told the line was long but the process relatively painless. That is until they hit Calgary traffic… in rush hour (poor guys). I look forward to hearing their tale first hand. I am sure Ken will be more than willing to spin us a good one. 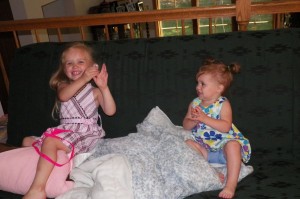 Way to go Daddy and Baba!

So instead of go go go with 5 kids and 2 ladies we did a more relax, unwind and sit around sort of day. Wrote a letter or two, coloured in colouring books… you know, restive things. 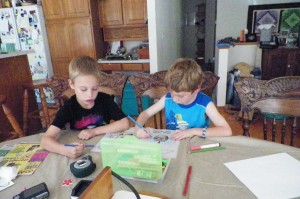 The kids did spend SOME time outside. Those neighbour boys (Billy, Jimmy and Charlie) while older than the boys are absolutely a godsend. Whenever they are out in the back so are ours running and playing and hopefully not making nuisances of themselves. 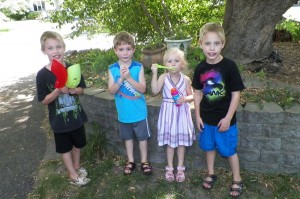 We ended our evening with another movie – Anastasia, after watching a trip video of Nana and Baba’s from way back of them swimming with the sting rays. I think Echo preferred the fishy show. It was so quiet last night, going to bed without Ken sitting in the room typing away… and dark with the monitor and his usual ONE LIGHT turned off. It is so surreal, yesterday morning we were talking about Saturday with the Novaks and Friday afternoon walk around the blocks to check for garage sales… and here we are – guys in Canada packing up our long awaited personal items so that we can close down the storage unit. It feels like one more tie cut to our old life and I am unsure if that is a positive or negative. 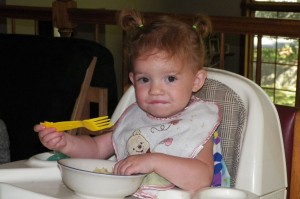 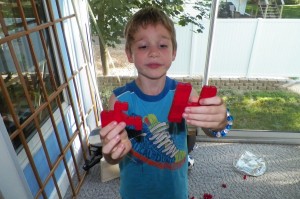 Anyway tonight there is more time to work on the cross stitch I have been doing. And of course work on the book reviews for the books I have read. Goodreads and my Kindle apphas been great to me lately. BUT I really want to make my way to the library soon! So be sure to check back for more reviews! 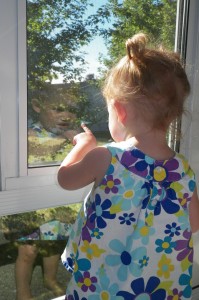 Who IS that cute baby in the window?