And I am back with another first in a H.P. Mallory series. This one featuring Dulcie the Fairy. She is hard working, independent and absolutely a riot. Dulcie the fairy has enhanced speed and fairy dust… which is a really amazing ability I am not going to ruin for you by explaining away. Unlike Jolie from the other series… Dulcie is a rather strong character. She doesn’t waver in her decisions… except perhaps in regards to her ears that are pointed, as she explains, like Spock. Something she does not like.

There is an element of romance, a strong mystery, undercover work.. TWO men in her life – her boss the elf Quillan and the new man in the room – Knight who is a great unknown. Add in other strong male paranormals… a vampire for one who does NOT sparkle, and some nitty gritty crime work and I have to admit this series is much more to my tastes.

Don’t get me wrong there is some gore, people do NOT die pretty and some blatant sexual content… they have to go undercover briefly in an S&M club… but not something that goes on and on and on. The character interactions are varied and entertaining, the supporting characters make you giggle and of course there is Dulcie fighting crime, putting herself on the line and snapping out amazing banter.

If you can handle the more mature elements and like some magic with your crime, check out To Kill a Warlock, the first in the Dulcie O’Neil series. 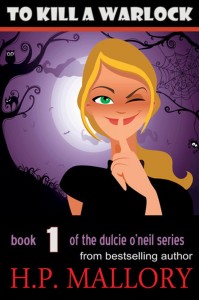 To Kill a Warlock