Thursdays are always a little hectic since Ken has his weekly “game night” with just the guys. This means our evening has to be cut short so that we can squeeze in dinner, baths and the like before everyone gets here. Today is even more rushed as Ken had to run out to Walmart to get some things from the weekly sale that ends tonight. My photos from yesterday’s sale were NOT there… oddly enough no record of them though I have BOTH my emails. Oh well, gives Ken something to do tomorrow.

Homeschooling went relatively well today… we did the letter K which was a huge hit just because it mentioned kangaroos and kittens (starfall had cute bits for each). We used buttons to decorate the capital K’s and glue tails on kites. I really need to get my hands on some kites, I am relatively sure where my little fabric one is stashed and the boys have never flown one, maybe next week we will get some favourable kite flying weather and go find a park and have at it. 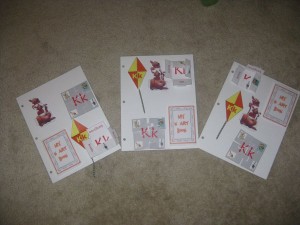 K is for Kite

Of course there was more painting of puzzle pieces. Emanuel wanted black so of course black paint ended up all over! Brown is officially empty and red looks rather pink to me. We will see how it looks after we put them on the frames tomorrow. All I can say is thank goodness the paint is WATER based. I really need to hunt down MORE things we can make with puzzle pieces as well as some green spray paint and some more brown paint so we can get together our kits to make Christmas trees!

We read one more story today – I skipped up to the number 7 in the series as 6 wanted you to figure out what word endings should be added into the sentences and the boys are simply not ready for that. There still is not a lot of interest in these stories so I am hoping after the weekend to move onto the BOB series or the Hooked on Phonics books we were given and see if we have better results. Trial and error! 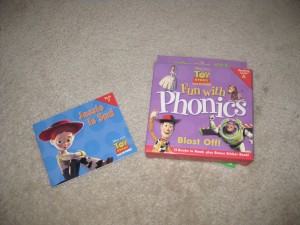 Story of the Day

I sent the boys out for some bike riding in the morning – well bikes and scooters. First Gavin game in with a skinned knee from falling off his bike – he was peddling too quickly. Small band-aid and he was ok. 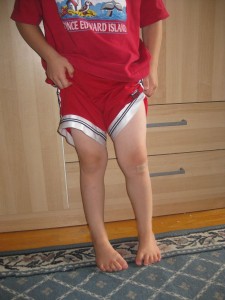 Then in came Emanuel in total tears from falling off his scooter – this one I am a little suspicious of. I am thinking maybe someone on a bike “nudged” the slower moving scooter and caused the crash. Either way the back of his leg was rather scuffed though he wanted me to  take a picture of the band-aid to go on the computer – so he could show Grandma Anna (hope she reads this lol). Thankfully that marked lunch time anyway. 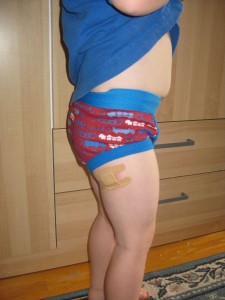 Ken and I had a special lunch to celebrate his increased good health (less AND shorter naps no less!) and his enjoyment of the job! Donairs and slurpee talk about yum! And relatively affordable as the place in the nearest mall has their donairs at 5.50 a piece! 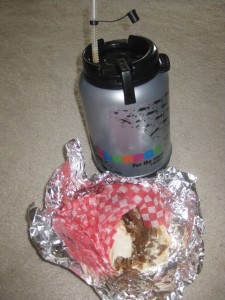 I asked for help with my math search on my egroups and have gotten a deluge of info to go through. We did cut up some cardstock and get some math cards made – matching number with number of objects. The stickers were from Nathan and Ada’s wedding – Nathan’s mom sent home the left over craft supplies that the kids had to play with and they were the perfect size! 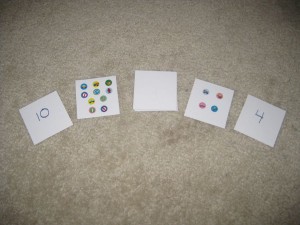 I plan to spend the weekend going through the free lapbooks and get something together we can start when we get a little further along in the alphabet. My mom says she has file folders and coloured printer paper we can have so that is a load off my mind! Add that to the 5.00 I got from doing a survey in the mail today and I am able to get some more fun stuff for the kids to use while we learn! Sadly Ken was not able to find the game in the series we played last week. I hope to be able to look myself once we get this photo mess cleared up.

The boys and I got in a game of Candyland tonight too, though Trinity was quick to try and steal the pieces and grab the cards. It was fun and we all made it to the Fiesta! 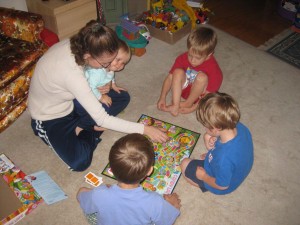 Stitching wise I have been working on the first of 3 little monsters for the boys for Christmas. I think I would have finished it tonight if not for the counting error I made. It is a UK pattern so the half stitches are not crisp like I would like so I am altering it slightly. I am not sure how I am going to finish these but they suggest putting them on little books. I also have to glue on googly eyes but I don’t want to do that until I am ready to finish them. 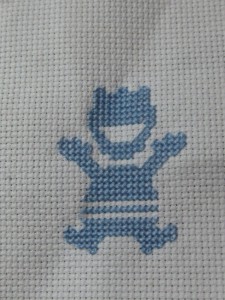 I am on the look out for whole wheat recipes now. I have half a barrel of the stuff and Ken is not fond of the taste. The best advice to date is to half it with my oatmeal applesauce cookies. So I am going to try that for the Sunday School batch. Tonight I made apple muffins, tomorrow the cookies and then the weekend off to mom’s. As it is I think we have one batch of applesauce left up the tree, sort of sad since next year we are pretty sure we WON’T be at this rental. So I will have to keep an ear open for people who have apples to get rid of! And watch for sales in stores.

So Ken has put up my donation button to go with the free patterns and possible commissions. Hopefully by tonight my Chemist themed stitch will be up on the site as well! I am getting rather excited about getting all of these patterns up! Feels so accomplished!

So tomorrow we prep to spend Saturday with Grandma… always seems like we need to take a van full for just one day. Changes of clothes, diapers, wipes, snacks for Trinity… the list goes on and on. It will be nice to get out of the city though and spend some time as a family out in the open. 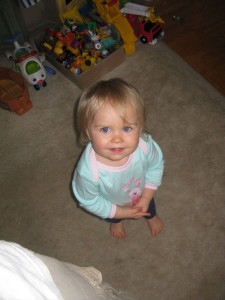 One thought on “Doing the Best We Can Each Day”