I have become aware, over the years, that Ken is NOT the luckiest man on the planet… I mean he IS lucky – look at our family and our life (we BOTH are lucky) but when it comes to bills and random events… they do happen TO him a lot. Thus why there was NO post, NO email and NO Twitter from yours truly for the bulk of the weekend! Yup, Shaw strikes again. To be fair, we TRUSTED them… but on the flip side – THEY are the ones who can’t seem to figure out how to work out a new account in a new location that is connected to an old account. And of course they come on a SATURDAY! When the bank cannot help us, Ken was less than impressed to be sure! So an entire weekend with no landline, internet or tv (Netflix)… what is a mommy to do? Well… CLEAN!
Best place to start – the kids’ rooms. Trinity’s has been crying out for a good full out tidy for over a week now so Gavin and I sat down and did it. She has so many kitties, dollies and other random things that it is difficult to truly put everything away but we did our best. Bedding was changed, toys resorted, papers that apparently MUST BE KEPT were stacked relatively neatly on the dresser… I give it one, maybe two days BUT it made it possible to do a good vacuum. 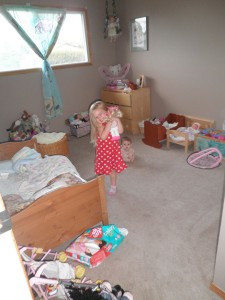 Clean but busy and somewhat cluttered... just how she likes it!

Emanuel’s was next and included his personal “junk drawer.” He is not horrible about keeping things once questioned but he does like his bits of paper. I do love his room, it is so… snuggly though I want to change the curtains to something a bit bigger that covers the whole window and we plan on getting him a smaller mattress (his bed he had at the old place simply does NOT fit in the room but the new mattress is not the highest priority… he LIKES it the way it is I am often told). 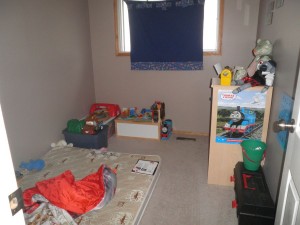 Ok so his bedding was in the wash but tidy!

We completed our quick but thorough clean with the twins’ room… Kijiji items were reboxed to clear up their closet, drawers and boy made hiding places cleared and put away. Their room is not huge but they do manage A LOT of hiding places! 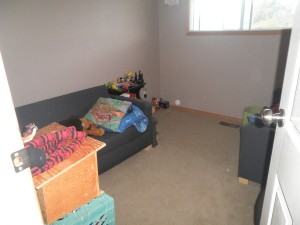 I still need some shelving in here ... and curtains!

Crafting is always easier without distractions… and with not even the tv (beyond movies we already have and boo on those this weekend… not in the mood) to do the deed I was free and clear – around kid issues and such – to do as much as I wanted! First project – refurbishing a dress Trinity was given in a set of handmedowns from another homeschooling family. It is a lovely blue velvet, mom already repaired the ribbon base border it was just up to me to do the rose removal and replacement. Not the easiest task as I have misplaced my stitch ripper and the manufacturer felt TAPING them on as well was a good idea!! So no matter how sad these flowers looked they were definitely on for the long haul.
After ripping out the flowers I went through my ribbon collection to decide on the stacked bow to use. It is a hard choice sometimes as some of my favourite ribbon does not have enough left to refurbish a dress AND make a matching hairthing but I found a premade (by yours truly) hairthing that was laying around in my finished box and enough ribbon to mimic the colour scheme enough to match. I am always surprised at how much ribbon I have and yet not the colour/pattern/theme that I want at the time. 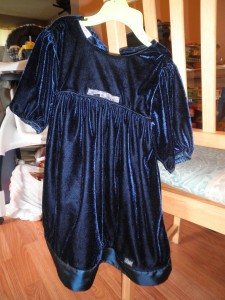 Time consuming as it was it was rather MY fault on that point – I chose to use the 1/8th inch brown as I was out of the 1/4 inch brown I had used in the hair thing I was basing this on. The 1/8th is just that little bit too slippery when it comes to making the last bow easily. But I am rather happy with the finished look! 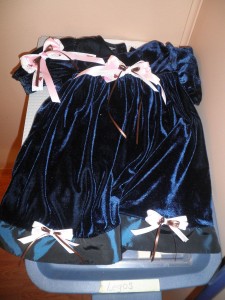 With matching hair thing (on left)

Breaks with working with ribbons lead to bread being made in the breadmaker, dishes being done AND my plastic storage containers cupboard being tidied (I even matched lids with containers… and as per the rules of the world found at least ONE container without lid and vice versa).
With one dress done it was time to move onto the other. This one had an iron mark on it (mom got it at her store for a song due to the damage), I am rather sure I showed it before… anyway no before picture… just an after! This one was done entirely on Trinity’s preference! She wanted PINK… I figured (and with Karyn’s texted urging) it best to go with her choice and it actually wasn’t half bad! But then who doesn’t love a pink butterfly? 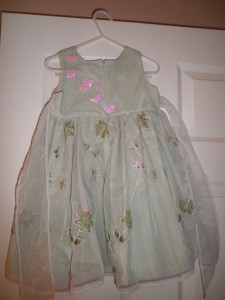 The back with flaw covered 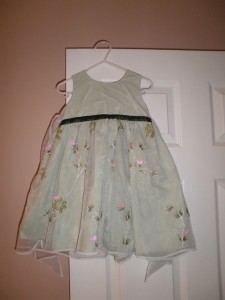 That reminds me of a couple crafts I completed Friday night. First of all – a duct tape rose! You can find the instructions for this on YouTube and all over the place. I watched this onespecifically… apparently he consistently adds new ideas and tutorials so I am 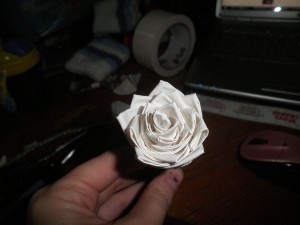 Looks great from the top... just don't look at the side.

And then there is the much awaited and beyond adorable – sock owl!! I made this sweety out of 2 pairs of Dollarama fluffy leggings. Not the best choice as the socks shed dreadfully when you cut them BUT it worked out in the end. We stuffed him with an old shirt of Ken’s that was on its way to the bin anyway, cut up into tiny strips. His face was all felt scraps and I used DMC floss for all the hand stitching. I am looking forward to making a plethora of these. After all if the heel runs out of the sock it is still owl material! I have a BabyLeg that is missing its buddy that I am debating sacrificing for the owl cause. It could be a lovely Christmas present for Trinity made out of something she wore as a baby! 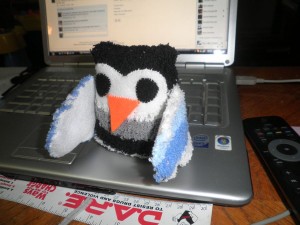 OWL CUTENESS BE BLINDED BY CUTENESS... LOVE IT...

We had a second set of wings to try out (someone else read the tutorial and did it slightly different). I would love opinions on the two variations. Ken loves the second version with the vertical wings. 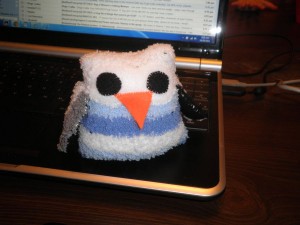 Wings of choice and further cuteness...

Now continuing the lack of internets theme I also did some scrapbooking… this time a series of Echo pictures. I have the same shirt in blue for Emanuel and another in pink for Trinity as they were ALL born at the same hospital. The twins were supposed to be but when I showed up in an ambulance at 29 weeks they passed me along as fast as they could to a better equipped hospital for preemies. 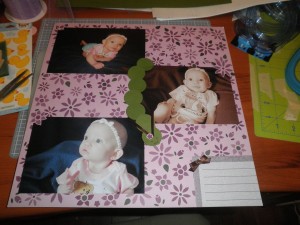 I got my laundry done – including bed linens on ALL beds (yay!!), even the quilt we took camping that was sitting waiting on getting into the washer. This machine is smaller than the one previous so that quilt is a solo wash. I am seriously thinking that once a month we need an internet free day for the whole family! Though Ken did do work and then go to where he could get wi-fi and upload it.
…and back to crafting… and a new craft for you to try out as well – chalkboard coasters! First is the necessary hunt for 4X4 inch ceramic tiles (or in the case of the ones I got – 3 3/4 inches squared???). I tried Freecycle first but it ended up being the local Restore(Habitat for Humanity) that had them at 25 cents a piece. And then of course the chalkboard paint… and felt scraps you can cut down to the same size as your tiles for backing. Follow the instructions on the can (and the site linked HERE) and 2 coats later – COASTERS! Trust me this will only be the BEGINNING of things I plan on spraying with this stuff… not nearly as awesome of duct tape it DOES have its place in crafting in this house now! 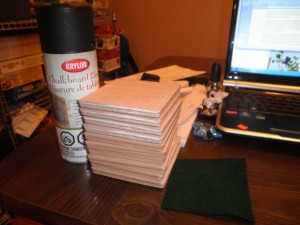 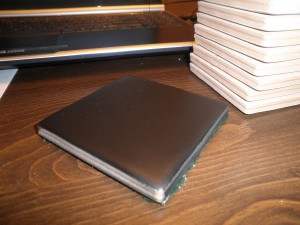 I forgot to mention last entry but we THINK Echo said her first word on Friday – Mama! the M sound HAS been her favourite for ages so not a huge surprise but super cute. So proud of her, she is standing alone for more and more short bursts now too… Ken is just dying for her to start walking with this tiny stature. 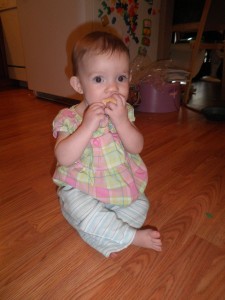 There have been some Fat Sheep updates lately, I hope everyone has been checking them out! There is quite the backlog of interesting incidents and adventures so there will definitely be more action on the site this month. I think the latest installment is the final piece in the wedding saga! Don’t mind that the links are odd… Ken is still working on sorting out why the site has decided to show my addy first and then add on the tag to the site. We are still on the look out for more adventures for Fat Sheep to have. This summer she has crossed off TONS and the list is looking a little sparse! So email me or leave a message on Fat Sheep’s Twitter, site or Facebook account!
Today was Sunday School – their first real session. Ken took the boys as Echo and Trinity were no where near ready when it was time to go (slow breakfast for Miss T ending in oatmeal in here hair!), instead we played in Trinity’s room and the girls had a bath. 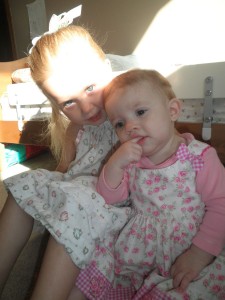 Sunbathing in the bedroom

A third variation on the owl to share as well… I think we are rather happy with the second set of wings, now here he is with separate eyes. 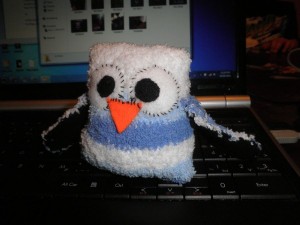 We hope to have the internet etc sorted out tomorrow but no promises. Either way, when Ken is able to check and do whatever he needs to do he does check my email for me! So it won’t be forever, but I doubt there will be a blog entry tomorrow. Either way we will be keeping busy here os when there IS an entry to share it will definitely be full of going and coming and all sorts of fun stuff! 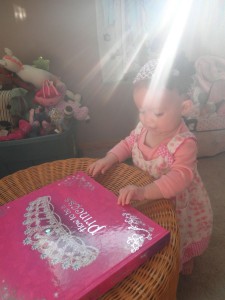