As the mother of 3 rather active and unique boys (regardless of the twins’ identical LOOKING status) I am always a wee bit curious about whether or not they learn the same way as girls… if there are things I should be doing that as their mother I would not necessarily see without some sort of prompting. So I was rather pleased when I came across a blog post by the site 3 Boys and a Dog titled The Learning Curve for Boys: Is it Different? (You can read the post in its entirety HERE.)

There have been many studies made into the differences in our brains. Apparently there are many in regards to female and male. I remember being told, when I was younger and bemoaning that the boys in class were annoying and childish, that boys mature slower (in general) that girls. This has, to some extent, held true in our own little group of 5. Trinity has shown more maturity than her brothers when hitting her age milestones. Though from time to time my boys surprise me as well.

3 Boys and a Dog sites 5 main categories where boys differ in learning needs than girls – Reasoning, Movement, Structure, Motivation, and Teams. The one that interests me the most as a mother AND as a homeschool educator is the second – movement.

In order to learn most effectively, boys must stay active, engaged and motivated.

I can honestly say I have experienced the squiggly seated learners, the brains that just can’t motivate for the boring sit down lesson. Spring and summer are our best months… the small amount of learning in the morning and then run run run for an hour or more before settling back into routine has saved many a headache. As has ensuring that our memorization includes gestures and wiggling… nothing is better than a poem or song that has you dancing along.

That is not to say that Trinity and Echo don’t need some extra go time… I think all kids need that feeling of activity in their day. Motivation is another point I have found that has become rather important.

Boys tend to get bored more easily than girls.

Now I am not sure hot true to my kids all 3 of these points are but I have found that when it comes to an activity or focus the boys are often much harder to force a focus. Of course, that is often tightly tied to the Movement point. Boredom is often the result of excess energy when faced with a sit down task. We have had to work hard on concentration with Zander. When he was 2 he had a prolonged and a typical febrile seizure. We were VERY lucky in that his concentration was really the only issue we have had resulting from that episode.

Let’s backtrack a bit to Structure, we have found this statement true:

I know for our boys a knowledge of what comes next, of what they are working towards (events, etc) or even knowing that I have a list in a book that will be checked off as they accomplish their assignments causes a calming to the OCD like concern and the feeling that there is an end to the work each day. While I have found that for our family too much structure overwhelms our boys, I have to agree with the author that knowing there IS structure to our day adds to the motivation in all of our children. 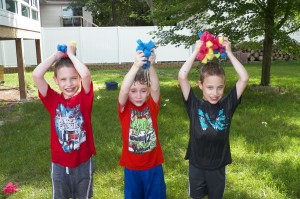