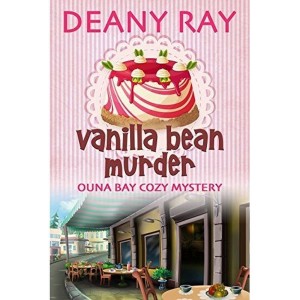 I had an hour or so when I snuck outside to the hammock for some alone time while the kids played computers this evening. This happened to be just enough time to read the rather quick read that is Wilde Deception by Ruth Rowland. This is the second book in the Cosset Cove Cozy Mystery Series and was a free find on Amazon. I have not read the first in the series but I really did not find that it hurt my enjoyment of this short story any to have missed it.

I found a few grammar/spelling/word issues… the most jarring for me was the word draw instead of drawer which made me re-read the sentence. One discrpency that had me running to my google was when the author described the main character Charlotte Wilde (reporter and owner of the local small time newspaper, who was once a reporter in the big city) and her friends Clara and Abigail (aunts to…) and Amy to a New England Pot Roast. This is fine and dandy until she described the CHICKEN as being very tender… as far as I can tell anytime someone is talking about a pot roast it is BEEF. Not a major complaint but it did bother me enough to leave off reading the story long enough to see if I was right or wrong on my assumption before diving back in.

Wilde Deception does not have a big romantic theme to it, there are potential love interests as far as I can tell and the characters tease Charlotte about it a bit, but it is not necessary to the mystery. I did find I did not have (even in retrospect) enough information as I read along to solve this mystery. This is not a hindrance to me as I rarely try to figure out the who done it in advance, but for some could be a problem.

The other main character is a rather large Maine Coon cat called Barney who had a role in this story and apparently a rather major role in the previous tale.

The story is light and fast paced but enjoyable. I enjoyed this quick glimpse into the life of Charlotte Wilde. It was entertaining and humorous as well as still being a traditional cozy murder mystery. So if you have a nice block of time some sunny afternoon do give this a try. And if you read the first book – Wilde Murder do give me your opinion! Sad but true my current book budget is a big old ZERO so for now I will enjoy my freebies and continue my list of to purchase! 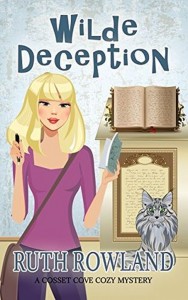 Another random library find win BIG TIME. In fact, though this is not the first book in the series by author Tracy Kiely, but the SECOND book, I found that I fell right into loving the characters. Murder on the Bride’s Side pulls its inspiration from a favourite author of mine – Jane Austen. Specifically the book Sense and Sensibility (and the movies are mentioned as well). The other lucky library find in this series… Murder Most Austen (the 4th installation) also pulls from the same inspirational waters.

What I love about the characters is they are all truly characters… Our main protagonist is Elizabeth Parker who is absolutely infatuated with all things Jane Austen. She is fulfilling the role of maid of honour for her best friend Bridget who is getting married. This brings her to the home of Bridget’s grandmother Elsie who lives in a rather palatial mansion. With a family of people who do not always get along Elizabeth is simply expecting in fighting… not the murder of one of the least likable family members.

There is the boyfriend (past bully) Peter, Chloe the wedding planner and potentially old flame of boyfriend and a family of people you either love or would love to hate. You get to go along with Elizabeth and find the solution to not only the murder but a host of questionable goings on in the great house. What I love about this story is that the main character is a babbler… she loves to think and chatter and you have to laugh along with her as she thinks outrageous things and sometimes lets them slip out.

There are plenty of wonderful Jane Austen quotes included along with a touch of romance… a good mystery and a wedding to boot. Murder on the Bride’s Side is a great cozy mystery in what I am sure will be an amazing series. Definitely a book to check out! 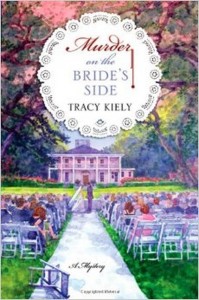