Hmm the month end teaser that I have been holding up for everyone … well, we are moving. And it has been one heck of a ride. Last month Ken did a check of the rental situation here in the city we live in, seeing how many that would suit our family are available (way more than when we moved here in June of last year. There was ONE we could apply for and we lucked out on that one, so the intent was to move before June to have an easier time of it) and if we could get out of our year lease early.

Remember the leak in the ceiling in the basement? Well it took FIVE DAYS for them to even come see it, they said they couldn’t find a plumber (well we were told by local friends that is ridiculous, that it had to be they couldn’t find a CHEAP ENOUGH plumber). And then when they DID come and see it they cut a hole in our basement ceiling, in the dry wall… without drop cloths or a container to hold the pieces… so you can imagine the mess that was left behind. And the hole in the ceiling that remained!

Add to that the layout of the place simply not working, the storage being lacking and our need to be in a place with owners who are a little bit more organized and cohesive and we simply needed to hunt down a new place.

So we collected our best references and started the hunt. I think Ken had seen over 2 dozen places by the end of this month, all sorts and all over the city. There WERE a few we had to discount right away, they were in bad condition or smaller than the place we already had. We were on short lists for tons, and had one ask for WAY too much personal information before even deciding on us (that one we had to pass on as it felt a lot like the beginnings of identity theft). What has amazed me is how many places strung us along, not making a decision until the very end of the month… nerve wracking I am telling you!

I am sure over the past few weeks those with eagle eyes have seen the chaos that is moving. That is one of the reasons that going to Cousin Veronika’s was such a godsend. That way Echo had freedom of movement and quiet while healing and I had a much needed break from the mess. It was especially important as by this time I was starting to crack from the stress of the rental hunt. 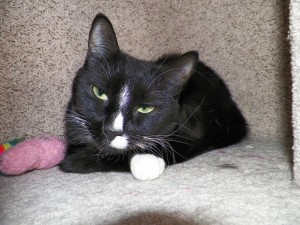 Had to share one more of Miss Dinah from that visit

Ken was looking at places right up until Friday which was really NOT how we had planned things. I am so thankful for the friends and family who kept me grounded, reminding me that this could have been the same result if we had waited to move until the end of our lease time (actually more likely as there is less available in the summer as everyone wants to move then). It really is just too bad that we cannot afford the “perfect” renting scenario – the ability to cover the new damage deposit, rent at the new place for a month AND rent at the old place for a month all at the same time! 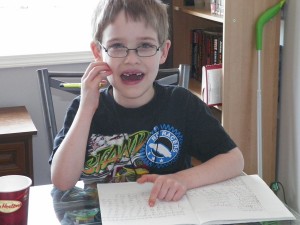 The boy with the missing teeth!

As it got down to the line the kids and myself were simply in the way. Combine that with the death of a family member for Chris and Chris in Saskatchewan and their need for a pet sitter and we were up and out of the house Thursday before noon. I packed clothing, some of the pertinent school stuff, white paper and toiletries and we headed out to sit the pets.

I bunked the kids down a little creatively. Echo and her playpen ended up in the computer room, Trinity and I sharing the spare and the boys all in the tv room in the basement. They all were a little bored… but that is sort of the theme for most of March with Echo’s surgery and the chaos of packing to move!

We worked on a special pet sitting project with the twins. We made a mini book for each of them with pictures of the pets, their names, what animal they are and some of the interesting things we learned about them. Gavin’s favourite animal is Duke (the white dog) which happens to be Zander’s as well. He and Trinity ended up in love with each other. 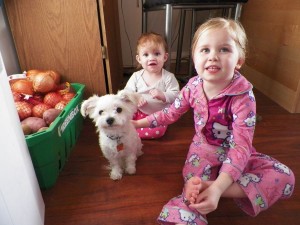 Duke and his girls

There was some excitement meeting the ferrets as well. The kids got to help feed them, give them water and even pet them before Chris and Chris left for the funeral. 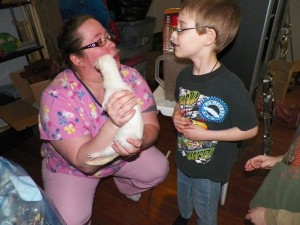 Meeting one of the ferrets up close

We had a few issues with the older cat. She is not friendly and 3 of the kids got scratched, thankfully nothing severe. BUT the other kitty – Tigger, she is a suck! So that more than made up for it. Poor Echo was confused as Dinah at Veronika’s and Echo are the best of friends. So going from that to Dria’s attitude meant she got that one step too close. 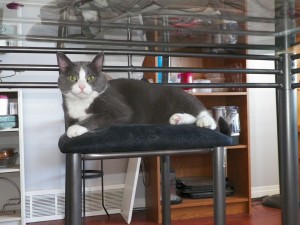 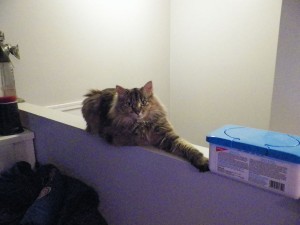 Everyone is a little keyed up from the upset, the surgery, the time away from home… and the confusion as to where home will be after the 1st has not helped. I have done my best to make adventures out of ALL the possibilities but having been in charge of Echo solely for a couple weeks has meant long days and short nights. She is a handful when you are the sole boss when she is up which leaves the evening to get things done and then she gets up so early… all in all I am EXHAUSTED! 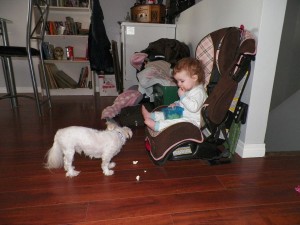 The great rental hunt actually went right to the deadline! Poor Ken was checking out places right up to Friday afternoon! The man was a powerhouse, he worked his full time contracting job AND rental hunted. Add to that the surgery (which took one day longer) and my time with Veronika and he was one busy individual. I am glad to say his health has NOT suffered, though the man could use a more intimate relationship with his hairdresser and a good razor.

The final result is less than optimum. We are the proud renters of a house… on the 15th or so of April. They have a repair to do before we can take possession. Not the best of scenarios but a relief all the same. Now to juggle the time until we get to the new place. That is one of the definite downfalls to having such a LARGE family – we take up A LOT of space! The challenge for us now is to create an adventure for the kids that will make this less than ideal situation into something exciting and new. The pet sitting book was my first go at that. The end result for each of the twins was rather nice actually, though it has reinforced that I need to work even harder on Zander with his writing skills. 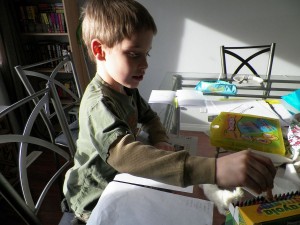 Gavin working on his book

We have found yet ANOTHER of Fat Sheep’s relatives… this one lives in Ontario and is on Facebook named Sheba Sheep. Once the Fat Sheep blog is up and running again we will have to do a whole post on her adventures! The family just keeps growing!

There was some sad news to share from Monday – Karyn’s father, who was diagnosed with Alzheimer’s a little more than a year ago passed away in his sleep. His funeral was the same day and time as the one Chris and Chris had to go Saskatchewan for – Friday afternoon. She is supposed to get home tomorrow night. I am hoping that we can meet in person before we head to mom’s for a bit of our exile and to celebrate Easter as we always do. Gotta wait on that van repair (of course… seriously while the Quest HAS been good to us for the most part, it has been a whole lot of hurry up and wait on its usefulness outside of city limits).

Now that some dear and wonderful friends have helped us move OUT of the old rental (thank you Sean, He Chris, Kristen, Fydo and Lauralee we owe you so much!) and it has been cleaned it is time for us to move on. Well try to, Ken went to call the landlord to come and walk-through and he was indisposed so that has been postponed for tomorrow. The kids are asleep, the animals resting and yours truly feeling like the future is a much brighter place. We are going to have an interesting April but it will lead to an AMAZING May! And for now, for now I try and figure out how to make life amazing for the kids with less than their usual school supplies. Wish me luck! 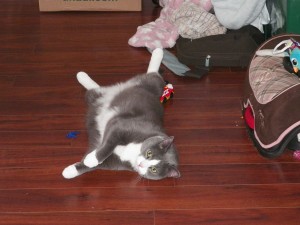 And one more of the cat for good measure

2 thoughts on “The Reality of the Situation”